While some forms of poetry have free rein with regard to their subject or number of lines and syllables, the haiku was established in Japan as far back as the 9th century with a specific structure, style, and philosophy. Many poets still write in the original 5-7-5 syllable pattern and follow the traditional rules for writing haiku. 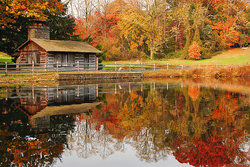 What is a haiku? It is a three-line, beautifully descriptive, form of poetry, intended to be read in one breath. If read in Japanese, most traditional haiku would have five syllables, or sounds, in the first line, seven in the second, and five in the last. The Academy of American Poets asserts, "As the form evolved, many of these rules - including the 5-7-5 practice - have routinely been broken. However, the philosophy of haiku has been preserved: the focus on a brief moment in time; a use of provocative, colorful images; an ability to be read in one breath; and a sense of sudden enlightenment and illumination."

Michael Dylan Welch, Adjunct Poetry Professor for the Northwest Institute of Literary Arts shares this sentiment, stating, "Most Western literary haiku poets have rejected the 5-7-5- syllable pattern. ...The poem gains its energy by the intuitive or emotional leap that occurs in the space between the poem's two parts, in the gap of what's deliberately left out. ...The art of haiku lies in creating exactly that gap, in leaving something out, and in dwelling in the cut that divides the haiku into its two energizing parts."

Haiku poetry traditionally discusses abstract subjects or those from the natural world, including seasons, months, animals, and even the smallest elements of nature, down to a blade of grass or a drop of dew.

While a haiku does not have to cover natural subjects anymore, it is most often used as a celebration of nature. And although modern haiku still focus on simple yet sensory language that creates a brief moment in time and a sense of illumination, the structure can be looser and traditional rules ignored.

So whether you choose to play by the traditional rules for writing haiku or go freeform is entirely up to you.

The structure of a traditional haiku is always the same, including the following features:

Steps for Writing a Haiku

Even though there are specific rules for writing a traditional haiku, the process can still be fun and rewarding. And remember that a modern haiku can be more freeform.

If you are wondering how to write a haiku for the first time, consider the following steps:

The most famed traditional Japanese poets include Matsuo Basho, Yosa Buson, Kobayashi Issa, and Masoaka Shiki. They are known as "the Great Four" and their work is still the model for traditional haiku writing today.

Let's take a look at two of Matsuo Basho's most famous poems. (Note: The 5-7-5 rhythm has been lost in translation, as not every Japanese word has the same number of syllables, or sounds, as its English version. For example, haiku has two syllables in English. In Japanese, the word has three sounds.)

An old silent pond,
A frog jumps into the pond,
splash! Silence again.

On a withered branch
A crow has alighted:
Nightfall in autumn.

The traditional form of haiku has also been embraced by English-speaking poets. Here are two examples by Kelly Roper from our sister site LoveToKnow.com, both with a focus on nature.

The season gives way.
Winter lays down her mantle,
As spring bursts to life

Waiting in the marsh,
The heron stands silently,
Fish sense death is near.

Now, let's take a look at modern Western haiku. Here are two examples, also by LoveToKnow's Kelly Roper. Notice the difference in style compared to the traditional haiku examples above.

Foul ball
Flys up through the air...
Fan catches it with his face.

Giant, foul-smelling shadow
Smashing through the forest.
Sasquatch is on the move.

Although many modern poets don't follow the 5-7-5 pattern, you will still come across a few who remain true to the original form.

Process of Writing a Beautiful Haiku

Reading through examples of haiku can help you understand and appreciate haiku before you write one yourself. Reading haiku to children can also help them develop a sense of how to interpret poetry, and begin the process of writing their own simple poems.

Remember to be creative, not only with your use of words but also with your punctuation and word order. A haiku is not designed to read like a sentence, so do not feel bound by normal capitalization and structure rules.