There, Their, and They're Practice

Did your English teacher ever spend time on there, their, and they’re practice? Surprisingly, it’s a lesson that many students seem to have tuned out. These are short, simple words that often get misused.

“There,” “their,” and “they’re” are homophones. That means they sound the same but have different meanings and spellings. For those who are new to the English language, homophones can seem rather daunting.

Don’t panic, let’s go over the basic rules for “there,” “their” and “they’re” and then put that learning into practice. In short, “there” is used to indicate something - i.e. that lamp over there - “their” is used to show possession - i.e that is their lamp - and “they’re” is a contraction of “they are” = i.e. they’re fond of that lamp. 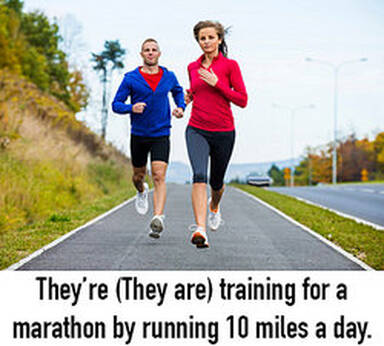 The Difference Between There, Their and They’re

Consider the following definitions and sample sentences to help you understand the difference between these three words.

The word “there” is used broadly in the English language. It can work as a noun, an adverb, a pronoun, and, rarely, as an adjective.

When used as a noun: “There” means “that place” and is often used as the object in a prepositional phrase. Consider these examples:

When used as a pronoun: “There” also refers to a phrase or a noun. For example:

When used as an adjective: “There” indicates which person or thing is being referred to. It’s worth reviewing this form of “there,” but know this is really an example of what not to do. It’s redundant and generally frowned upon.

“Their” primarily works as a third-person plural possessive adjective. Its main function is to refer to something that belongs to “them.” Consider the following examples:

“They’re” is a contraction of the words “they” and “are” (or, less commonly, “they” and “were”). “They’re” is usually followed by a verb ending in the letters -ing (which is known as the present participle). Let’s take a look at a couple examples:

Practice Using There, Their and They’re

To master the difference between these terms, there are several different ways to turn practice into perfection.

Put pen to paper. See if you can create your own sentences, using “there,” “their,” and “they’re.” Talk about “their cool pencil case” or mention that the teacher’s dry erase marker is “over there” in a short story of your own creation.

Read your sentences aloud. Go back and read each of the above sentences out loud. Pay attention to each word’s usage in proper context. Although the words will always sound the same, reading them aloud will help you visualize “their” to indicate possession and “there” to indicate “that place over there.”

Read a wide variety of content. Truth be told, there’s no better way to become an English language expert than to read. Read as many books, magazines, and blogs as you possibly can. You’ll notice how words are used in their proper context and even when something seems to be written in error.

Listen to speech. Have a friend or family member read you a sentence out loud, using one of these words, and see if you can use what you’ve learned about each word and context clues to identify whether “there,” “their” or “they’re” is used.

Ready for some practice questions? Review these exercises and find the answer key below. Good luck!