The words weather and whether can easily be confused with one another. These words are homophones, which means that they sound virtually the same when spoken, yet are not spelled the same and have different meanings. Making the right choice between weather vs. weather requires learning their meanings and their parts of speech. 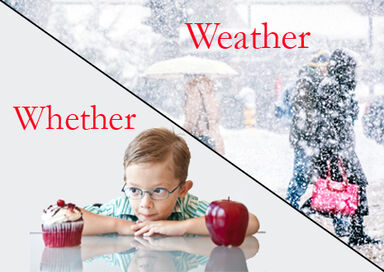 weather vs whether in a sentence
Advertisement

When to Use Weather

The term weather can be a noun or a verb. Each usage has different meanings.

Weather as a Noun

When weather is a noun, it refers to current atmospheric conditions, such as heat and temperature, snow, wind, rain, or barometric readings. Review a few examples of using weather in a sentence to see how weather is used as a noun.

Weather as a Verb

When weather is a verb, it usually means to withstand something, such as a storm or crisis. It can also refer to what happens to an object when it is exposed to the elements. This usage is not as common as the noun form. There are a number of ways weather can be used in sentences in its verb form.

When to Use Whether (Conjunction)

Unlike the word weather, the term whether is not a noun or verb, but rather is a conjunction. A conjunction is a word that joins two words or phrases together. The term whether is similar in meaning to the word if. It is usually used as part of a phrase that also includes the word or, serving to link together two possible choices or alternatives. Consider a few examples of using whether in a sentence to see how the word works.

How to Choose Between Weather and Whether

To master the difference between these homophones, just follow a few steps.

Memorize the definitions and parts of speech of each word. You can even have others test you on their meanings. For example, they can read you a sentence utilizing weather, and you have to tell them which homophone is being used in that particular sentence.

While it may sound a little odd, there are circumstances where both words (weather and weather) could correctly be used together in the same sentence. Reviewing these terms in such a context can help you develop a deeper understanding of how the words differ.

Practice using weather and whether in your writing.

Homophones are a type of homonym. Words that can sound the same are known in English as homonyms. Some homonyms, like weather and whether, are homophones, while others are homographs.

Homographs are words that are spelled the same, but have different meanings. Homographs may or may not be pronounced the same. The word bow means to bend down as a sign of appreciation or respect, while bow means a decorative knot. The English language has many examples of homographs.

Homophones are words that sound the same, but may have different spellings and meanings. In addition to weather vs. whether, there are various other examples of homophones in the English language.

Whenever you are dealing with homophones, remember these important steps to help you avoid using the wrong terms in your writing.

The more you write, the more likely you are to encounter words that can easily be confused. Be prepared to make the best language choices by learning more about such terms. Get started by exploring some words with multiple meanings.