When to Use I or Me in a Sentence

Whether you have spoken English your whole life or are just beginning to learn the language, the age-old issue of "I vs. me" has confused students for as long as anyone can remember. Part of the trouble is that English has many words that can mean the same thing. 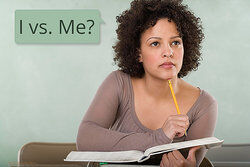 When to Use I or Me in a Sentence

"I" and "me" are both words you use when you're talking about yourself, but each one is used in a different situation. Both are first-person personal pronouns that let you talk about yourself without using your name, which would feel quite awkward in friendly, casual conversation. "I" and "me" have the same definitions, but they are in a different grammatical case.

The Difference Between "I" and "Me"

The main difference between "I" and "me" is simply the type of pronoun each word is: "I" is a subject, or nominative, pronoun and "me" is an object pronoun.

"I" is a nominative pronoun, which means that it is used as the subject of a sentence, or as a predicate nominative. For example:

In this case, "I" is the subject of the sentence - the person who performed the action of going to the store. This sentence is correct because it uses "I" as the subject.

You also use "I" as a predicate nominative after a "to be" verb. For example:

In this case, "I" comes after the verb "is" and is a the predicate nominative, or another name for the subject of the sentence - in this case, "it." This may sound unusual, because many people colloquially say, "It's me," but using "I" in this way is grammatically correct and preferable in formal English.

"Me" is an object pronoun, which means that it serves as a direct or indirect object to the verb or as the object of a preposition. For example:

Likewise, this sentence uses "me" as an indirect object. These are often sandwiched between a verb and its direct object to indicate who is benefitting from the action.

In this sentence, "me" is the object of the preposition "for" and is also correctly used. Note that this sentence conveys the same meaning as the previous one, but it's constructed a bit differently.

Beginners often confuse "I" and "me" because they mean the same thing, but even native speakers can struggle when there is more than one subject or object. Study the errors below so you can avoid making similar mistakes in your writing.

In this sentence, there are two subjects "Jack and me," but me is the objective case. As it's a subject, the correct pronoun is "I." A good way to check is to remove the other people at the beginning of the sentence and re-read the sentence to see if it sounds right ("Me got home late" does not!). Most people can find the right word by ear this way.

Here "I" is used as a direct object-the person receiving the licks but "me" is the right word to use as a direct object. Again, try removing all other people after the verb except "I" and re-read the sentence to see if it sounds right (again, "The puppy licked I" does not sound right).

This is another example of how multiple objects adds confusion. Here "I" is incorrectly used as the object of the preposition "above," but it should be "me."

This one trips up a lot of people as it can't be checked by ear, like the examples above. Though this is a common colloquial phrase, it is not grammatically correct. In this sentence, "was" is a form of the verb to be that sets up a predicate nominative, so the writer should use "I," which is in the nominative case.

This is another example of an error because of a plural subject. "I" should be used because it's the correct choice when it comes to subjects. It can also be helpful to consider the position of the word in the sentence. "I" is used before the verb, while "me" is almost always used after the verb (the exception being the predicate nominative).

Correct Usage of I and Me in a Sentence

To get a sense of what excellent grammar looks like, peruse the examples below that show when to use "I" or "me" in a sentence:

Make the Right Choice Between I and Me

With a little practice and some careful consideration about whether you are working with the subject or the object in a sentence, you can ensure you make the right choice between "I" and "me" every time. Though many people ignore the rules when speaking casually to friends and family, it's important to be diligent about your usage when it comes to writing for an audience.