Words that Begin with the Letter H

Descriptive words that begin with the letter H aren't at all hard to find. That's because H is a common letter in the English alphabet, but also because there are so many great H words. Get a dictionary and turn to the H section. You'll be surprised at how many words you never knew (and how much trouble you can get into if people around you get that dictionary away from you to see what those obscure, descriptive words mean!)

Does This Make Me Look Fat?

Let's say you're a typical married guy, and your wife decides to try on some skin tight jeans. You know the inevitable question is coming as she squints in the mirror: "Honey, be honest. Do these jeans make me look fat?"

(Okay, so how much do you value your life?)

The first thing you might to do is compliment her taste in habiliment (that is, her taste in her attire.) This avoids the direct problem of truthfully telling her how she looks in the jeans.

If she's a hoyden, chances are she'll look fine. That's because hoydens - more popularly known as tomboys - tend to be athletic and don't tend to have the "junk in the trunk" issues that cause women to despise the current trend in skin tight jeans.

Now, let's say you're incapable of keeping your trap shut, and you absolutely must debrief her on how she looks. Don't be surprised if your wife turns into a harpy or a harridan (both words with similar definitions - an angry woman with a razor-sharp tongue.)

If things get really bad, her head might do a 360 degree turn. Then you'll have a total hyrax (shrew) on your hands.

Descriptive Words that Begin with H

It wouldn't be the first time a man who was too honest for his own good discovered that discretion is indeed the better part of valor.

What are those funny sounds coming from the bathroom? Your wife might be so angry it sounds almost as if she's hylatic (barking in anger.) So let's say you decide to smooth over the trouble. Keep your dictionary hidden, or at least don't tell her a hippometer would help you make up your mind in how she looks in those jeans.

That's because a hippometer is used to measure the height of horses, but she'll never believe that! Don't be surprised if she thinks you're a humgruffin (a terrible person), and cries lustily.

Or, on the other hand, she may just horrent to her heart's content (horrent, as in bristle stiffly at the mere mention of your name.)

Will You Hora With Me?

If you want to make up and set things to rights, your best bet is to avoid asking her to dance. With your H-word obsession, you might ask her if she feels like a hora, and that's likely to land a frying pan square on your head!

A hora, by the way, is merely a dance with no further implication. But if you start talking about horas, or horology....ummm, is there a plane to Beirut anytime soon?

Like a hora, horology is a perfectly innocent word. It means the manly art of measuring time, as in your wife saying, "It'll be a cold day in hell before I ever talk to you again!"

As horrisonant (dreadful-sounding) as all these H-words are, try to engage in humicubation. No, that won't get you arrested, but it might get you out of the hora-house.

Humicubation merely means prostating yourself on the ground with grief at having wounded your wife's delicate sensibilities (with all those evil-sounding H-words.)

Just coo little hypocorisms (nicknames) into her ear, and pray she's hypobulic (weak-willed.) All your devoted hyperbole (exaggeration) about how wonderful she is may restore you to your happy life again.

Just watch out. Descriptive words that begin with letter H can be very dangerous! Remember the H-bomb! 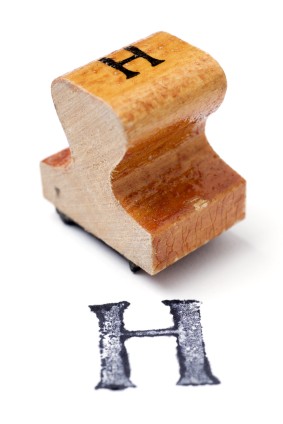 Words that Begin with the Letter H