Words That Describe a Tornado

Are you interested in writing about the weather and looking for words to describe a tornado? Tornadoes are rotating columns of air that make contact with the surface of the Earth. They can range in strength from damaging trees to leveling houses and deforming skyscrapers. Tornadoes come in many forms and are often mistaken for other natural phenomena. 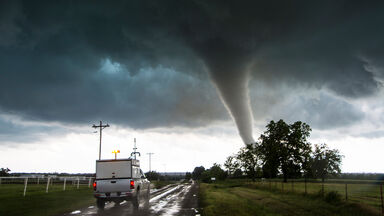 The word tornado is a broad term to describe a certain kind of common weather event that can be very dangerous. Most tornadoes are over quickly, leaving behind a wake of destruction and contrastingly serene weather after they pass. There are several different types of tornados.

Tornadoes are some of the most destructive natural phenomena on Earth. There are many ratings for the intensity of a tornado, but the most famous one is the Enhanced Fujita Tornado Damage Scale. No list of vocabulary words for tornados would be complete without mentioning this scale. It is based on how much damage a tornado can cause to man-made structures and vegetation. The scale was created by Ted Fujita in 1971 at the University of Chicago and was updated to the Enhanced Fujita Scale in 2007.

Tornadoes aren’t described only in terms of their type and Fujita level. Build your science vocabulary by learning other words related to tornadoes.

Sometimes when you’re writing about a tornado, what you are really looking for are the best adjectives to describe its appearance or effects. There are many ways to describe a tornado, both in terms of how they sound or look, as well as their incredible power and the destruction they leave behind.

Words Used to Describe a Tornado in Movies

Even people who don’t live in areas where tornadoes are a threat have likely seen them depicted in movies. Tornadoes are described using a few different words in some popular movies.

Cyclone in The Wizard of Oz

In the famous 1939 film The Wizard of Oz, the main character Dorothy is knocked unconscious by a tornado and wakes in the magical Land of Oz. The movie referred to the tornado as a cyclone multiple times leading to the word cyclone becoming a layman's term for a tornado. The enduring popularity of the movie has led to the term cyclone still being used today as a tornado word. The real definition of cyclone usually involves an area of fluid motion rotating in the same direction as the earth.

Twister in the Movie Twister

Like The Wizard of Oz, the movie Twister also popularized a new term for a tornado. The movie was released in 1996 and went on to become the first Hollywood film to be featured on the DVD format. Today, the term twister is synonymous with the word tornado due to the movie's immense popularity.

Spanish Origin of the Word Tornado

Learning about tornadoes is a great way to build your knowledge of weather and science. If you’re interested in continuing to learn more about the natural world and want to continue building your science-related vocabulary, explore vocabulary terms for sound and light.