Personality traits are the distinguishing qualities of a person. They’re what we outwardly observe when interacting with someone. Often, the terms “personality traits” and “character traits” are used interchangeably, and you may be wondering if there’s much of a difference between the two. The simple answer is yes, there is.

A character trait is something more deep-seated and cultivated. So, it might be within someone’s character to always stay true to their word, as that’s how their parents raised them.

In a nutshell, someone’s character aligns with their core values, while someone’s personality is what we observe in our interactions with them.

Let’s take a closer look at personality types and words that describe personality traits. The next time you observe someone, you’ll be able to more accurately assess their outward personality. 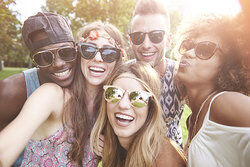 The Five Categories of Personality Traits

The field of psychology has given us the Five Factor Model (a.k.a. The Big Five). It breaks down personality traits into the following categories:

This model has developed data-driven categories that explain the most basic personality traits. You’ll notice it’s rather broad and no one is enough of a cookie-cutter to merely exist within one category. Several subgroups do exist, but we’ll focus on The Big Five here.

People who display the openness trait are adventurous, imaginative, curious, open to new ideas, and perceptive. This category separates people who are imaginative from those who are more practical.

Open people tend to be appreciative of art and filled with wonder over the natural beauty that surrounds them. They’re often travelers seeking new cultures and ideas to add to their own experiences. Scoring high on the openness scale indicates people who are more creative and able to express their emotions.

Scoring low on the scale generally indicates people who are more straightforward or traditional. People with low scores are generally uninterested in the arts and prefer simple solutions over more complex or inventive ones.

Other words to describe openness:

People who score high on the conscientiousness scale show great self-discipline and awareness of their responsibilities. They often have a very high regard for achievement and will use that as a means to measure themselves against others.

This leads conscientious people to be very organized, academically prepared, and successful. In fact, after intelligence was factored, conscientiousness was found to be the most useful predictor of performance in the workplace out of any of the Big Five.

Low scores on the conscientiousness scale indicate people who are unorganized and seemingly unable to accomplish tasks. Low scores are also strongly connected with procrastination.

Other words to describe conscientious:

People who display extroversion traits tend to experience enthusiasm, self-confidence, and stimulation from other people’s company. They’re often full of energy and actively seek attention from others. Extroverts tend to be competitive and very involved in social circles.

People low in extroversion are more likely to be introspective, reserved, and thoughtful.

Other words to describe extroversion:

People who exhibit agreeableness show great compassion, cooperativeness, and empathy for others. They value being congenial and will go to great lengths to maintain their relationships.

Agreeable people have an optimistic view of human nature and believe people are generally honest and cooperative. This altruistic view on life can help them remain involved in various social causes.

People on the low end of the agreeableness spectrum tend to be blunt and rude.

Other words to describe agreeableness:

People who score high on the neuroticism scale are prone to being anxious, depressed, or angry. They’re often easily disturbed or stressed by common situations that lead them to express a negative emotion.

This can lead people in this category to perceive normal interactions as threatening and trivial problems as impossible.

People who score on the low end of neuroticism are more likely to be confident, brave, and adventurous.

Other words to describe neuroticism:

Where Do You Fit In?

Did you find that you belong to more than one of these categories? Since humans are complex beings, it’s likely you don’t fit into one generic area. However, you probably saw your traits more clearly in one group over another, right?

While there are just five main types of personality traits, the English language offers a wealth of words that describe personality traits within these categories. The examples above are just a selection, but maybe they’ll help you discover more about yourself or develop one of the characters in your writing.

If you can think of other words that describe personality traits let us know in the comments below.