Many intelligent people (and people who like to sound intelligent) use the phrase "That begs the question" to mean that a situation raises a question. After all, questions need answers, so aren't they "begging" for an answer? Not in this case. Begging the question refers to making a faulty argument — and if you can recognize this fallacy, you're less likely to fall for it. 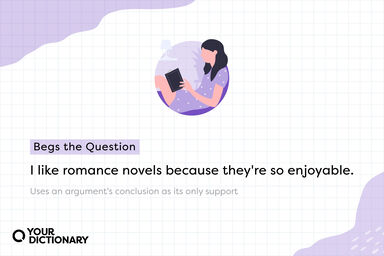 Begging the Question Is a Fallacy

"Begs the question" doesn't have anything to do with begging or even questioning. It's a rough translation of the phrase petitio principii ("assuming the original point"), which is the Latin adaptation of one of Aristotle's original fallacies. When someone begs the question, they are using an argument's conclusion as its only support.

Begging the question is an informal fallacy because it concerns faulty reasoning, not the argument's structure. Saying "X is true because it's true" creates an invalid argument without real support.

Examples of Begging the Question

The most common type of begging the question is similar to circular reasoning, where an argument returns to its beginning without proving itself. For example:

These examples may seem obvious to you, but consider how tricky it could be to answer these arguments in real time. Many people get into trouble by assuming an argument to be true ("This politician is trustworthy because he says that I can trust him") and making life-changing decisions based on faulty conclusions.

How Can I Tell if I'm Using It Right?

But It's in the Dictionary!

Consider a scenario: You're making a passionate argument to an opponent who, unbeknownst to you, knows the fallacy meaning of "begs the question."

Embarrassing, right? Using proper word choice is always the best way to communicate clearly and avoid confusing exchanges like the one above. Your opponent was using "begs the question" correctly, and you were using it conversationally. Like all multiple-meaning words, there's no real harm in using "begs the question" in this way — as long as you understand both meanings (and don't mind stricter grammarians believing that you've said it wrong).

Use 'Raises the Question' Instead

But if you don't like the idea that others are judging your use of "begs the question," just replace it with "raises the question." It's just as valid and even more understandable. Best of all, "raises the question" leaves no room for misinterpretation — and addressing additional questions can help you avoid making a fallacious argument in the first place!

Many intelligent people have used “begs the question” when leading up to a discussion question. But even more have fallen for faulty arguments with bad reasoning and poor support. Equip yourself against fallacious arguments with these tips: