Break a Leg: Meaning and Origin of a Common Idiom

When someone is about to perform on stage, you say, "Break a leg!" But why would you say something that sounds so violent — and where did this odd expression come from? Learn all about the "break a leg" meaning, origin and use in modern conversation. 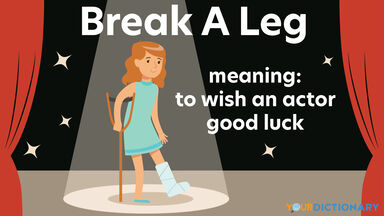 When you tell someone to "break a leg," you're wishing them luck. It's an idiom that's mainly used for wishing an actor a great and successful show. If you weren't familiar with the expression's positive connotation, you would think that the phrase sounds more like a threat than a supportive comment. But actually, actors consider the phrase "Good luck" to be much scarier than "Break a leg!"

There are several possible origins to this common but odd expression. Like many theatre superstitions, "break a leg" began in the early days of drama and stage performance, possibly as far back as ancient Greece. However, it's become such a regular part of theatre life that no one really knows exactly where it started.

The first written account of the phrase came from Irish writer Robert Wilson Lynd's 1921 essay titled "A Defence of Superstition." It described the most superstitious arenas in Britain at the time: theatre and horse racing. Lynd explained that wishing a man luck in horse racing was actually unlucky. “You should say something insulting such as, 'May you break your leg!'” he suggested.

Another possible origin for "break a leg" comes from the Yiddish phrase for wishing success, "הצלחה און ברכה." The Hebrew translation, hatzlacha u-bracha, became Hals- und Beinbruch ("broken neck and leg") when adopted in German due to its similar pronunciation. Both English and German pilots used the phrase in World War I to wish each other luck on a mission.

Bernard Sobel's 1948 Theatre Handbook and Digest of Play explained that actors never said "Good luck," only "I hope you break a leg." Although it was the first time the phrase appeared in print in the theatre world, it certainly wasn't the first time actors said it to each other. There are many possible origins to "break a leg" in the history of theatre.

If you want to wish an actor a good show, there are more ways to do it than saying, "break a leg." Check out these additional theatre expressions that wish someone a good show. (But whatever you do, don't say "good luck" — as seen in the song "Bad Luck to Say Good Luck on Opening Night" from The Producers).

Using Break a Leg in Conversation

Even though it is most commonly used in theatre, the "break a leg" idiom has made its way into everyday conversation. It's a way to wish someone luck before a big moment. The exception would be sports — not many athletes want to hear the words "break" and "leg" before a game!

Other ways to use "break a leg" include:

Other Idioms to Wish Luck

Want to wish someone luck without mentioning fractured bones? Stick to "break a leg" for actors, but try out these additional idioms before someone has an important event offstage.

Whether you're a classical actor waiting to take the stage in Hamlet or you're nervously waiting for an important job interview, the phrase "break a leg" is meant to bring you good luck. It's just one English idiom with many possible origins and a steady place in our vocabulary. For more idiom explanations, learn the meaning of "it's raining cats and dogs." Or, see how much you already know about the phrase "dead as a doornail."