The Data Behind Data: Is It Singular or Plural?

You're a grammar nerd. You know the difference between to, two and too, you use who and whom correctly, and you'd never mix up your subject-verb agreement in a sentence. But while you know that the word data is actually plural, sometimes you use it as a singular noun — because even to you, the alternative sounds too nerdy. Alternately, you had no idea that data was supposed to be plural, and are just learning it now. Either way, it’s time to answer this question, once and for all. 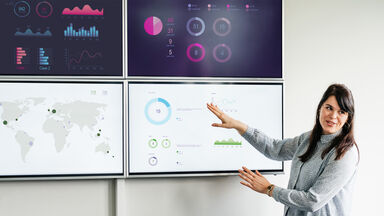 Data is the plural form of the Latin noun datum, meaning "a piece of information." When you put more than one datum together, you get data. That sounds simple enough — except you might have been using data as a singular noun your entire life.

Examples of Data in a Sentence

Like other Latin plural nouns (such as bacteria), the word data has become much more commonplace than its singular form. Unless you work in a scientific or technological field, you're unlikely to hear the word datum on a daily basis. However, in those contexts, the proper use of data looks like this:

Notice that this usage of data takes a plural verb, according to the rules of subject-verb agreement. If these sentences sound awkward, check out these sentences instead:

Do you prefer these examples? You're not the only one. The phrase "data is" is more popular than "data are" in everyday conversation and usage.

Should You Use a Plural Verb?

Science and Technology: Use a Plural Verb

If you have a background in science or technology, using a plural verb with the word data may not be news to you. You've seen it throughout your education and career, and you're probably more used to saying "The data are correct" than "The data is correct." But if you're encountering this issue for the first time and you're writing about science or technology, change your grammar expectations and use a plural verb here, just like the rest of the scientists.

Everyday Use: Use a Singular Verb

If you're attached to the idea of using data with a singular verb in other contexts, go ahead and keep doing it! You've probably seen data used as a singular noun so often that it feels like an error to use it any other way.

And if you're an expert grammarian who is torn between proper usage and popular usage, consider data as a collective noun (like team or group). It's a collection of more than one datum, so you can technically use it with a singular verb anyway.

Nouns to Use Instead of Data

Still struggling with using data in a sentence? Consider replacing it with other singular verbs, such as database or data set. These words also represent multiple points of data and use singular verbs to be grammatically correct.

As society evolves and adapts, grammar and vocabulary must follow. Usage that was correct generations ago doesn’t always make its way to the 21st century. For more words with Latin origins like data, check out: