Dead as a Doornail: Poetic Origins of a Common Term 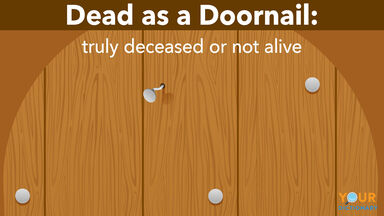 dead as a doornail meaning
Advertisement

What Does Dead as a Doornail Mean?

Poetic Roots of Dead as a Doornail

"For but ich haue bote of mi bale I am ded as dorenayl."

But why “dead as a doornail”? Why not "dead as a coffin nail"? That would have made more sense, right? While no one can be exactly sure why something is as dead as a doornail, the reasoning, according to the Morris Dictionary of Word and Phrase Origins, goes back to carpentry.

In early carpentry, you would pound a huge doornail into a door then bend the back of it so that it wouldn’t come out. This was called "cinching" in technical speak, but it was also called "dead" or "dead in the wood." Therefore, that nail was never coming out! So, if something is as “dead as a dead doornail,” then it’s undoubtedly a goner.

Examples of Dead as a Doornail

“Dead as a doornail” has made its way into poems, literature and song lyrics. It was even featured as a title in the fifth book in Charlaine Harris’s Sookie Stackhouse series. Check out a few ways it’s been used throughout history and today.

Sentences Using Dead as a Doornail

Do you need a little more help seeing how this idiom is used in everyday English? Not to worry! Enjoy these simple sentence examples you can work into your everyday speech.

Idioms like “dead as a doornail” find their way into English in exciting ways. Learn more about fun idioms by checking out idioms about money. Additionally, idioms about food are deliciously appealing.