Is the S or C Silent in "Scent"? The Mystery Explained

The word scent smells like a mystery! It sounds a lot like sent and cent, so it's hard to tell whether the "s" or the "c" in scent is silent. Keep reading to learn the answer — it may surprise you! 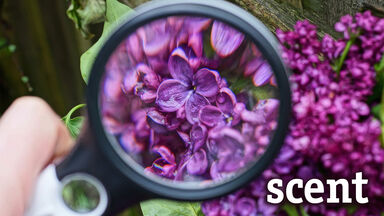 In order to learn more about the pronunciation of scent, we must look into its etymology (origin). Scent comes from the Old French word sentir (sawn-teer), which means "to feel, perceive or smell," and was shortened to sent in English.

The word became scent in the 17th century. Scholars believe that the "c" may have been borrowed from the Middle English words ascend and descend (and therefore, ascent and descent). It also could have come from the increasing influence of the word science in 1600's Europe. Either way, scent has always been pronounced with a /s/ sound.

Is S or C Silent in Scent?

So, which is it? Is the "s" or "c" silent in scent? The answer is: neither is silent. They work together as a digraph in the word scent to create the /s/ sound. Some may argue that the "c" is silent because you only hear the /s/ sound, but because "c" always makes an /s/ sound before an "e," it's not silent in scent.

Scent is not the only word to follow this spelling rule — but that's not to say that "sc" always makes a /s/ sound. You'll find this letter combination in lots of different English words with many different etymologies.

If you take a moment to think about it, you can probably come up with more words that start with "sc" that also make a /s/ sound. You can probably think of several that include "sc" but aren't pronounced like /s/ as well! Take a look at these words that use the "sc" consonant combination in different ways.

When the "sc" digraph comes before an "e" or an "i," as it does in scent, it typically makes a /s/ sound. These words typically have roots in the Old French or Greek languages. Words that have an "sc" digraph include:

Some of these words originally started with a "c" in their native languages. Scissors, for example, comes from the Old French cisoires, which means "cutting instrument." The "sc" part was added in the 15th century to conform with the Latin stem sciss- ("to cut").

The "sc" digraph can also make a /sh/ sound. These words often have Italian or Germanic origins. Notice that some seem to follow the "i" and "e" vowel rules above, but are still pronounced as /sh/ based on their languages of origin. These words include:

Yiddish, originally a German dialect, is another origin of several "sc" words with a /sh/ sound. The Yiddish words schtick, schmuck and schnoz all have German origins (stück, shmok and schnauze). Other words, such as luscious, come from Middle English spellings (licious, short for delicious).

The "sc" letter combination also works as a consonant blend in some words, rather than a digraph, because you can hear both letters. Many of these words began in Greek and went through French, which changed the "k" for the modern "c." Words that use the "sc" blend as a /sk/ sound include:

Now you know why some "sc" words sound like they have a silent "s" or "c," but don't. In many cases, these words follow clear English spelling rules. But words with different origins may need their own spelling memorization. It's all part of becoming a better writer, speller and reader!

The Tricky World of Spelling

Just when you think you know how to spell English words correctly, a tricky word like scent crosses your path. Improving your spelling skills can be a lot easier than it looks. Silent "c" words and silent "s" words aren't the only kinds of words that use silent letters. Check out a list of silent "t" words that might also be confusing when reading. If you'd like more spelling help, take a look at 13 more standout spelling rules that you should know.