“Put it catty-corner from the TV,” you call out to your new spouse, hoisting another heavy moving box into your arms. “Don’t you mean ‘kitty-corner’?” they call back. You set the box down with a thump as you stare at each other. “How can I be with a person who says it like that?” you each think. Don’t call the divorce lawyer yet, because guess what — you’re both wrong. 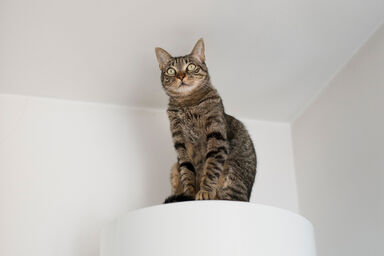 It’s Not a Corner for Cats

The actual phrase, which means “diagonally opposite from something else,” is cater-corner. It comes from the French word for “four” (quatre), which was often spelled catre centuries ago. The word evolved in English as cater, which has an obsolete meaning of “to cut diagonally” across a four-cornered (or cater-cornered) shape. No cats involved, unless you have an actual "catty corner" in your house that’s totally devoted to your feline friends.

But I Like Kitty (or Catty) More Than Cater

If cater-corner sounds weird to you, you’re not alone. Both kitty-corner and catty-corner are more popular than cater-corner, and they’re used with equal frequency. But you’re unlikely to find people who use these words interchangeably — depending on where you were raised, only one seems correct to you.

According to Josh Katz, author of Speaking American and creator of visual maps of dialectal differences, there’s a regional split between those who say kitty-corner and those who say catty-corner.

The next time someone tries to correct your pronunciation of this positional word, don’t get upset. Just remember that they may come from that other part of the country that says it another way, and don’t mention sodapop or tennis shoes (two more regionally specific terms that are sure to elicit strong opinions).

Wait, But What About Cattywampus?

“Are you telling me that cattywampus is actually kittywampus?” you’re probably asking. No (even though that is kind of an adorable mental image). The original term is catawampus and it means “askew” or “off-center.” While both cater-corner and catawampus use the obscure definition of cater for “diagonal,” they’re slightly different. A lamp positioned cater-corner to a table looks neat and purposeful, while a lamp positioned catawampus to a table looks sloppy and haphazard.

Other Ways to Say ‘Diagonal From That Thing’

Some people have never used either of these words and can’t believe that there’s a debate on them. If you’re one of them, you might use these terms instead when trying to say “It’s across from there but also to the side.”

Don’t Get Cornered in a Conversation

Whether you say kitty-corner, catty-corner or cater-corner, you’ll get your point across (even if you ruffle a few feathers). For more commonly misheard phrases, check out: