Whether you’re literally spinning in circles or you’ve completely changed your mind about something, the question remains — have you done a 180 or a 360? To determine the answer, we have to take it back to geometry class. 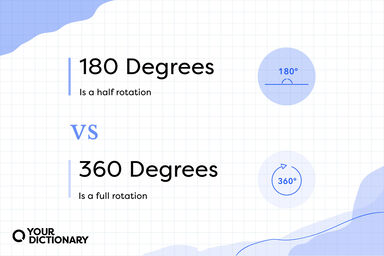 180 and 360 angle icons with definitions
Advertisement

If you throw it back to math class, you’ll recall that a full circle is 360 degrees (also spelled out three-sixty), and 180 degrees (one-eighty) is half a circle. So if you’re making a turn:

Changing Direction: Using 180 and 360 As Idioms

At some undetermined point in the 20th century, 360 and 180 started to be used as idioms to describe literal or figurative movement. The expression “do a 180” refers to changing your mind about something or changing direction. Taken figuratively, this can mean you’ve completely reversed your previous opinion or behavior and are now doing the opposite. If you literally do a 180-degree turn, you’re heading in the opposite direction.

In contrast, If you did a 360 — either literally or metaphorically — you’d be right back where you started; a 360-degree turn is a full circle or rotation. Metaphorically, this makes sense if you think of it in relation to the term “coming full circle.”

Clearing Up the Confusion Between 180 and 360

Sometimes you might say “do a 360” when you mean “do a 180.” It’s an easy mistake to make because 360 is twice as large as 180, so you may be tempted to use the larger number to emphasize the information. Even major publications like golf.com can get it wrong.

“Tiger Woods got off to a disastrous start at the PGA Championship, going bogey double-bogey over his first two holes. But Tiger’s fortunes did a 360 thereafter, assisted, perhaps, by a shirt change. That is, if you believe what you read on Twitter.”

In this context, doing a 360 would mean that his fortunes remained exactly the same rather than reversed — not quite what the author intended.

Doing a half-turn such as turning around or reversing course is pretty straightforward, but what about when doing a 180 is less literal?

Coming Full Circle: How You Can Do a 360

“Doing a 360” is a perfect way to express that something has come full circle or back to the beginning.

Back To the Board

Familiarize yourself with the meaning and history behind some of English’s best (and most puzzling) idioms.