The Meaning of Movember and Other Relevant Portmanteaus

Don’t worry, Movember isn’t a typo. It’s just a hairier spin on November. If you’ve ever wanted to grow out some mutton chops or see how you’d look with a full beard or perfectly waxed handlebar mustache, Movember is your time to shine, and it’s for a good cause. If not, it’s a good opportunity to learn about portmanteaus, and if you have any qualms, you can shave ‘em for later. 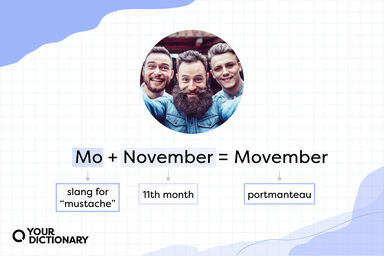 breakdown of the portmanteau Movember from the article
Advertisement

What Is a Portmanteau?

When two (or more) words love each other very much, they sometimes join together and birth a whole new word that combines some of the sounds and letters of the original words. That wonderful new bundle of joy is known as a portmanteau.

Portmanteau is itself a portmanteau. Outside of linguistics, a portmanteau is a type of carrying case or bag. The word comes from the Middle French word portemanteau, which initially referred to a person who carried a prince’s mantle (or cloak). The word joins porte, an imperative form of the verb for “to carry,” and the word manteau, meaning “cloak.”

Movember was the brainchild of Travis Garone and Luke Slattery, two buds from Melbourne, Australia. The two friends wondered at the absence of the mustache in modern fashion. It was 2003, a time when the clean-shaven look was preferred over face whiskers.

That thought led to a group of 30 other buddies growing out mustaches over the course of November with a goal of raising awareness and money for men’s health, particularly prostate and testicular cancer.

Since then, the Movember campaign has gone global, gaining support from over 6 million people.

What Does “Movember” Mean?

Movember is a portmanteau that combines the word mo (a slang term for mustaches that is common in Australia) with November (the eleventh month in the standard Gregorian calendar).

Why Do We Make Portmanteau Words?

For no reason, for any reason, for edutainment (another portmanteau!). Portmanteaus have existed for nearly as long as we’ve had language. It’s a form of creative expression as much as it is a means of saving characters for a tweet.

Take Movember. Even though it’s two different words, it’s really just November with the “N” changed to an “M,” making it easy for people to at least figure out the pronunciation even without context. By comparison, you have the similar campaign of No-Shave November. It’s a mouthful of a name with extra syllables and a compound adjective.

Because English is such a magical language, Movember isn’t even the only occasion or holiday formed out of a portmanteau. To be honest, it’s probably not the last either!

Juneteenth marks the official end of slavery in the United States when General Granger read General Order 3 to the people of Galveston, Texas, on June 19, 1865. The word Juneteenth is a portmanteau of June and nineteenth.

Technically, Thanksgiving is a compound word made of thanks and giving. But Thanksgivukkah, a combination of Thanksgiving and Hanukkah, is a portmanteau. It’s a way to note when Thanksgiving and the Jewish Festival of Lights overlap, but that won’t happen soon. The next time the two holidays will overlap is the year 2070 and then the year 2175.

For interfaith families, Chrismukkah combines Christmas and Hanukkah, which tend to overlap more often than Thanksgiving and Hanukkah.

Deeparaya is a combination of Deepavali or Diwali (celebrated by Hindus) and Hari Raya (celebrated by Muslims). This portmanteau is mostly common in Malaysia and Singapore.

Halloween actually comes from a combination of hallow and e’en. E’en is a shortening of even or evening. It’s a reference to All Hallow’s Eve.