Moot Point: Meaning and Origin of a Common Expression

The phrase "moot point" is a common expression with an interesting origin story. It's also mispronounced all-too-often. Discover what "moot point" really means, so you'll know how to correctly understand this frequently used term. 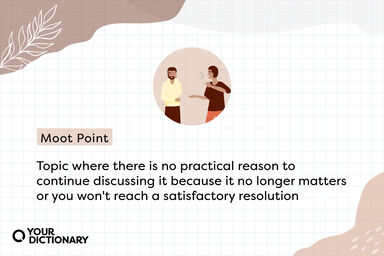 What Does Moot Mean?

In order to make sense of the phrase "moot point," it's important to first know the meaning of the word moot (mo͞ot). What does moot mean? It has a few different definitions and can function as three different parts of speech.

A moot point is a topic or subject that is moot. The phrase "moot point" is used to indicate that there is no practical reason to continue discussing a particular topic, as it would be impractical to reach a satisfactory resolution. However, one could continue to discuss such a matter as an academic or hypothetical exercise.

Origin of Moot and Moot Point

The word moot was originally used to refer to a meeting or assembly of people brought together for governing or judicial purposes. The people assembled for the moot would consider issues that were up for debate. Such issues could be described as moot points because they were the topics being discussed by those participating in the moot.

This historical usage is now considered to be archaic, though it is relevant to how the word moot is used in the field of law. The legal definition of moot point refers to a legal question that is open to debate, as it has not been definitively determined via a court or legal precedent. As such, it is open to debate.

When saying the phrase moot point aloud, it's important to use the proper pronunciation. People sometimes incorrectly say mute (myo͞ot) point instead of moot (mo͞ot) point. The word mute has a completely different meaning than moot, so it should not be used in this context. (The word mute means silent or unable to speak.)

In the TV series Friends, the character Joey Tribbiani came up with another way to mispronounce moot point, leaving the "t" off of "moot" to end up with "moo point." While the topic of what cows might think of being included in such a conversation is an example of a moot point (since there would be no way to actually discover such a thing), it would still be incorrect to say "moo point."

To get a better idea of how to use moot point in conversations or writing, consider the example sentences below.

If you want to express that something is a moot point without actually using that phrase, consider substituting a synonym or similar term. The words and phrases below mean basically the same thing as moot point, depending on the context in which they are used.

Opposite of Moot Point

If you need to express that a point is the opposite of moot, consider one of the following antonyms.

The phrase "moot point" is just one of many common expressions in the English language that can be a bit challenging to understand and pronounce. Expand your knowledge of other turns of phrase by exploring more examples of common expressions and what they mean. From there, boost your pronunciation know-how by exploring the most often mispronounced words and phrases in the English language