'Penultimate' and Other Words You're Probably Using Wrong

If you've ever used the word penultimate to describe the very last item in a series or collection, it probably felt pretty great. It's a much fancier word than ultimate, after all, and it's a lot of fun to sprinkle into conversation. But here's the bad news: That's not what penultimate means. You used it wrong — and even worse, there are plenty of other common-but-fancy (and some just common) words that you're probably using incorrectly as well. 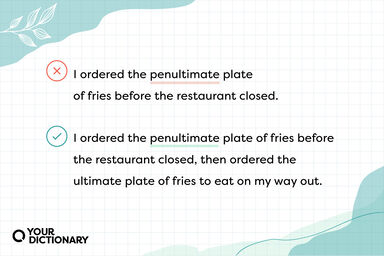 Penultimate: Saving the Best for (Not) Last

Penultimate doesn't mean "last" — it means "second to last." It's the 19th chapter of a 20-chapter book, or the third act of a four-act play, or the seventh puppy you swore was your last puppy until you saw your eighth puppy. Ultimate is the word to use when describing the final part of a series (or when describing something as the best or highest challenge, such as "Ultimate Frisbee"). Once you learn to use penultimate correctly, you can really impress your friends with antepenultimate, which means "third from last"!

Utilize: You’re Utilizing It Wrong (and That Was Wrong Too)

Adding the suffix -ize to a word automatically makes it look fancier. And utilize is a nice, three-syllable word that essentially means the same thing as use — so why not throw that bad boy into your writing? The problem is, utilize has a much more specific meaning than use. It means “to use an item beyond its intended purpose.” You use a fork to eat; you utilize a fork to pick a lock when the zombies are right behind you.

Obliged: Don’t Make Me Thank You

Obliged and obligated sound similar enough to be the same word, so most people use them interchangeably. But unfortunately, that's not how English works. Obliged means "in one's debt" and involves a sense of gratitude and returning a favor, while obligated means "compelled to do something" and doesn't usually involve any gratitude at all.

Writers sometimes depict mothers of naughty children as shaking their heads with a bemused smile. They're annoyed, but also amused. Unfortunately, that's the incorrect use of bemused, which actually means "confused or bewildered."

There's one correct way to use weary: to mean "tired." You can be physically weary ("He was weary after a long day's work") or emotionally tired ("I'm weary of your complaining"). However, it does not mean "nervous or cautious" — use the similar-sounding words leery or wary for that.

Poisonous: Not For Scary Things That Will Sting You

Disinterested: Not as Boring as It Sounds

When your uncle is once again telling the story about his game-saving throw during his high school football glory days, you may describe your response as disinterested. But actually, disinterested means "unbiased." The word you want to describe your utter boredom is uninterested.

Good: Get Good at Using Good

"Now, come on," you're saying. "You got me on that poisonous vs. venomous thing, but I know I've been using good correctly." And you may be right, if you're using good as an adjective to describe a noun. However, if you've said, "I did really good on the test" or "He handles the ball so good," you're using it as an adverb, which is incorrect. Use well in these cases.

How to look like a genius: Make a point, slap down an i.e., and follow it with examples for an argument. It looks super smart and feels amazing. But you're thinking of e.g., which stands for exempli gratia ("for example") in Latin. The abbreviation i.e. stands for id est, which means "that is," and stands in for the phrase "in other words" to explain more about a statement. Like most Latin phrases, only use it if you're sure you get it.

If you've used decimate as a synonym for "utterly destroy," you're not alone. Newscasters, writers, lyricists, and pretty much everyone who's described a scene of destruction tends to make this mistake. But decimate actually means "to kill one out of every ten," hence the Greek prefix deci- ("one tenth"). Only true wordsmiths may follow this distinction, however — the word's conversational meaning has grown to include "mass destruction" due to its popular usage.

If you've ever had a grammar geek narrow their eyes and say "Actually, I think you mean infer, not imply," bad news: they're probably right. Imply means "to make an indirect suggestion" and infer means "to come to a conclusion based on evidence." That grammar geek was implying that you need to fix up your word choice, and you can infer that they're not much fun at parties.

It's what all the kids are saying: "That's so random!" Like every generation before them, they're taking a perfectly good word with a perfectly clear meaning and using it for their own purposes (i.e., wrong). They mean "unexpected" or "silly," but random actually means "occurring without reason or pattern." Say it to be trendy if you want, but remember: Nothing's cooler than using words correctly. That's why English teachers are the coolest people around.

What does it mean to be nauseous? It's not the sick, spinny feeling in your stomach before you throw up — that's nauseated. The word nauseous describes the thing that causes nausea, such as a boat trip, a bad smell, a twirling roller coaster, seeing someone else throw up ... great, now we're all feeling a little nauseated.

Farther: Go Away (and Away, and Away)

Let's take this idea farther. Wait — bring it back! Farther refers to a physical distance, so when you take an idea farther, you're actually taking a thing to a different place. Further is the word you want when you're talking about non-physical items and figurative distances.

More Ways to Weigh Your Words

Have any of these words now made their way out of your vocabulary? Don't eliminate them altogether — just use them correctly! Dress up your lexicon with these additional resources: