Raining Cats and Dogs: Meaning of a Strange-Sounding Idiom

If you're unfamiliar with the raining cats and dogs idiom, hearing or reading that phase must seem quite shocking. Fortunately, it's not terminology that's meant to be taken literally. Discover how to interpret "raining cats and dogs" meaning and learn about the possible origins of this very unusual-sounding figure of speech. 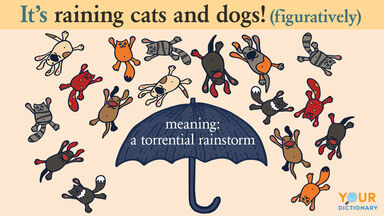 While it's impossible to know which, if any, of the above musings on the origin of the "raining cats and dogs" meaning might actually be true, it's certainly fun and interesting to speculate.

There are many examples of idioms in literature. In the case of "raining cats and dogs," there are records of the exact phrase and similar wording in British literature as far back as the 17th century.

The "raining cats and dogs" idiom is commonly used in English language sentences, as are many other examples of figurative language.

Using Idioms in Your Writing

Now that you're familiar with the "raining cats and dogs" meaning and the possible origins of this unique idiom, take the time to consider how you can use idioms in your own writing. Start by discovering how idioms can make your writing more interesting. Then, get to know some other idioms that relate to everyday occurrences and items. For example, learn about the origins of "beat around the bush." Then, discover what "when pigs fly" means. From there, explore idioms about money.