Speak Softly and Carry a Big Stick: Meaning Behind the Proverb

You've probably heard the phrase "speak softly and carry a big stick" before, but do you know what it really means? The wording might conjure the image of someone whispering while wielding a large piece of wood, but that's not the story of what this saying really means. 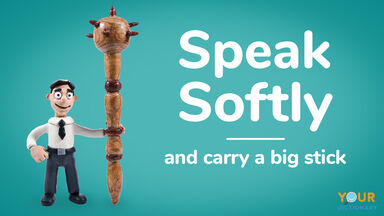 Origin of Speak Softly and Carry a Big Stick

The phrase "speak softly and carry a big stick" became a common expression after U.S. President Theodore Roosevelt first publicly used it in a 1901 speech. There was a bit more to the full statement Roosevelt used in his speech. The complete wording is:

"Speak softly and carry a big stick — you will go far."

The full phrase indicates that success is likely to result when you take a nicer approach even when everyone involved knows that you have a more forceful option at your disposal.

Roosevelt did not intend for the phrase "speak softly and carry a big stick" to be taken literally. Instead, this phrase was intended to be a figurative description of his approach to diplomacy and foreign policy. This approach came to be known as big stick diplomacy, a defining characteristic of Roosevelt's residency. The idea is that diplomacy backed up by power and a willingness to use it will lead to success.

Roosevelt advocated for first seeking a diplomatic solution (by figuratively speaking softly) to foreign affairs matters. However, he also wanted those who entered into peaceful talks or negotiations with representatives of the U.S. government to be well aware of the power of the country's military force and/or economic power (both examples of proverbial big sticks) and its leaders' willingness to use them to advance the country's interests.

Big stick diplomacy may have started with Roosevelt, who is the only person to serve three terms as a U.S. president, but it remains in use as a diplomatic strategy today.

Everyday Examples of Speak Softly and Carry a Big Stick

Even if you have no interest in political diplomacy or foreign relations, you have probably experienced the speak softly and carry a big stick approach in your life. Any time someone seeks to get something done by asking nicely rather than using a more forceful approach, that person is adhering to the philosophy of speaking softly and carrying a big stick.

Getting the Message Across

When you have the power to make something happen by force but choose to take a kinder, gentler approach before resorting to that, you are speaking softly while carrying a big stick. If you enjoyed learning the meaning behind this proverb, explore some other common expressions and what they mean.