Trick or Treat! A Not-So-Spooky Guide to Spelling the Phrase

When October 31 rolls around, you hear the clarion call resounding throughout your neighborhood: "Trick or treat, smell my feet, give me something good to eat!" It’s a pretty intense request, and not a single “please” in sight! But trick or treat has a surprisingly in-depth history, both as a phrase and an activity. 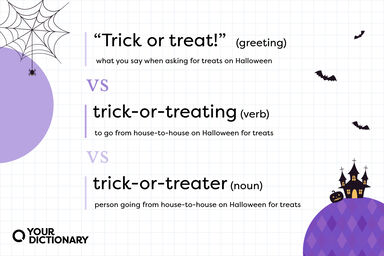 Trick or treat, trick-or-treating, and trick-or-treater on an image with parts of speech and definitions from article.
Advertisement

What Does It Mean To Say “Trick or Treat”?

Trick or treat is a greeting used by kids as they go door-to-door in the pursuit of candy on Halloween night. It’s a bit of a weird phrase when you think about it, but the idea here is that the child will perform some sort of mischievous trick or prank on you unless you provide a treat in the form of sweets or candy.

Much like carving jack-o’-lanterns and other Halloween traditions, trick-or-treating has gotten a bit tamer in its intent. These days, the threat of a trick is gone, and kids usually get their treats, regardless.

How Do You Spell “Trick or Treat”?

When you’re writing out trick or treat, you don’t need to overthink it. It doesn’t require much special treatment. It’s usually written as a standalone greeting, so make sure you capitalize the first “T” if you're writing it as one. You can also add an exclamation point (Trick or treat!).

Where Did “Trick or Treat” Come From?

By the 1950s, trick or treat became popular enough to appear in a Peanuts comic strip and a Disney cartoon called Trick or Treat.

Using Trick-or-Treat as a Verb or Adjective

Thanks to the confusing rules of English, you have trick-or-treat as the verb form of trick or treat. That means the only thing separating the verb from the greeting is a couple of hyphens. This also gives you the past tense trick-or-treated and the present participle trick-or-treating.

Trick-or-treat can also act as an adjective when it precedes a noun that might be involved with or related to the act of trick-or-treating.

While trick or treat is the greeting, trick-or-treating is the actual activity of going house-to-house on Halloween for delicious sweets. This usually starts at or slightly before sunset. Participating houses will usually have decorations. Some areas may have trick-or-treating events at large malls or shopping centers for increased safety.

How Do You Spell “Trick-or-Treating”?

Trick-or-treating can be a present participle verb and a gerund (a verb that acts as a noun). When writing this phrase out, use hyphens between each word (but don't capitalize unless it's the beginning of a sentence). This is because the words act as a whole phrase.

How Do You Spell “Trick-or-Treater”?

Trick-or-treater, meaning a person partaking in the activity of trick-or-treating, is also hyphenated. Remember, you want to keep the phrase together because it’s not “tricker or treater.” It’s trick-or-treater.

Trick-or-treating as an activity actually has roots in several other traditions that involved going door-to-door and asking for something.

Guising, which comes from the word disguise, is a Scottish tradition that involves kids going door-to-door in disguise and telling a joke or story or singing a song. In return, the homeowners give kids food or sweets.

The English had a variation of this known as mumming or mummering, likely derived from the Old French word momeur, referring to a jester or actor in a mask. Also known as mummers’ plays, this is an old Christmas tradition that involves a group in costume going door-to-door and holding informal performances that included plays, songs, jokes, and dancing.

A similar tradition was souling. This initially started with impoverished families visiting richer families and promising to pray for their dead relatives. In return, the richer families would provide pastries called soul cakes. This eventually changed to kids going door-to-door to ask for money or food.

The exact origin of the term souling isn’t known. It may have come from the folk etymology for sole as the people souling were often on foot. It may have also come from the word sowl, a fairly under-used word that referred to any sort of food, especially that eaten with bread.