What Does [Sic] Mean? Using It Correctly

If you don’t know what it means, it can seem a bit jarring to see [sic] appear in a written document. It isn’t the most common notation or abbreviation, but it does have a specific meaning and purpose. Discover what does sic mean, how to use it and what it stands for. 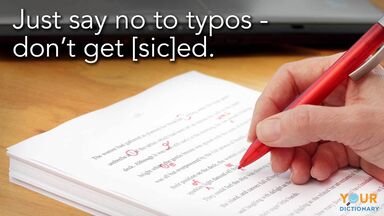 what does sic mean example
Advertisement

What Does [Sic] Indicate?

When [sic] appears in writing, it is always used within text that has been quoted directly from a source. Sometimes the original text that a writer wants to quote has grammatical errors or spelling mistakes. It is not acceptable to change any wording in a direct quote, even to correct a grammatical or spelling error. Quoted text has to stay in its original form. That’s what [sic] is used to indicate.

What Does Sic Stand For?

Sic is actually a Latin word that means “thus” or “so.” Basically, when you use [sic] in text, you’re communicating the equivalent of “thus it was written,” which lets people know that you didn’t write the text this way, you know there’s an error in it and you also know better than to reword a direct quotation that’s attributed to someone else.

So, actually, the word sic doesn’t stand for anything. There isn’t a sic abbreviation and sic is not an acronym. Perhaps because it is often mistakenly perceived to be an acronym, people sometimes say that sic stands for spelled in context. That’s not technically accurate, but if thinking of it that way helps you remember what it means, then do it. That’s just a testament to the power of acronyms and mnemonic devices.

Different Ways Sic Can Be Written

While [sic] usually appears in brackets, that is not the only option for writing this term. It can also appear in parentheses or simply appear in italicized text. They all mean the same thing. For example, if the pronoun “its” is used instead of the contraction “it’s” in text a writer wants to quote directly from a source, the writer could indicate such in text in any of the following ways.

In addition to there being multiple ways to write [sic] in text, there is an alternative. To avoid having to use [sic], writers can simply paraphrase source text (with proper attribution) rather than quoting it directly. This way, the information can be presented in a grammatically correct manner that reads well, without the need to point out an error in the original text.

Writers often do this, unless there is a specific reason that information must be presented in text as a direct quotation. Unless the work is a document where readers expect to see [sic] notations and know what they mean, avoiding using this notation can help prevent avoidable confusion.

[Sic] is very common in documents used to reduce spoken communication to writing, as well as academic writing. It also shows up frequently on social media posts.

Transcriptions of legal proceedings, such as depositions, court proceedings or testimony before Congress, must be recorded verbatim. Exact transcriptions are also common practice with speeches, shareholders’ meetings and other formal proceedings where a formal, written record of the spoken communication that takes place is needed. The goal with this type of transcription is to get an exact record of what was said, so everything has to be recorded as-is, mistakes and all.

Because academic writing often involves extensive secondary research, students and academicians frequently use verbatim quotes in their writing. While paraphrasing is often used, some circumstances require writers to use a direct quotation. As a result, it’s not unusual to see [sic] in research papers. It is also fairly common in academic journal articles.

While social media posts are at the opposite end of the formality spectrum from transcribed communication and academic writing, they are an area where [sic] is often used. That’s partially because memes are so popular, but a lot of people who create memes do so with spelling mistakes or grammatical errors. The same is true with general tweets or status updates.

When people see a meme or post that they agree with, they often want to share it. If it has errors in it, though, there’s always a concern that others will think that the person who shared the information didn’t know there were mistakes in it. Adding [sic] to something you are sharing or retweeting via a social media site is a way of letting people know that you’re aware there’s an error and the mistake isn’t yours.

Now that you know what sic means and how to use sic in writing, you have started mastering the art of academic writing. That means now is a great time to expand your expertise in this area. Discover the most important academic writing skills and focus on growing as a writer.