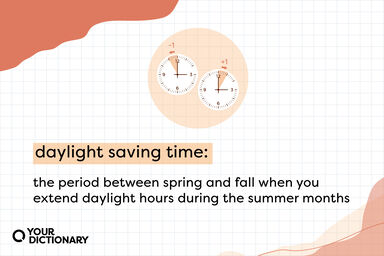 The term "daylight saving time" and a definition of it from the article.
Advertisement

Daylight saving time (often abbreviated to DST) is the correct form of the phrase. However, a lot of people say savings instead of saving. In casual speech, it’s generally fine to say either, but when you’re talking or writing in a more formal space, stick with daylight saving time.

Even though it sounds like it should be an official holiday, daylight saving time is not capitalized.

It’s hard to say why people latched onto the incorrect daylight savings time. It’s possible that people are used to saying financial terms, such as savings account or savings and loan, in which savings is a plural noun. It could also just be that phonetically, savings blends better with time and is nicer to say.

If daylight savings time sounds better to you, you’re not alone: Adding that “S” is generally more popular than the real term. Feel free to say it in conversation and casual emails, but if you’re using the term professionally, it’s best to go with daylight saving time (no hyphen—more on that next).

Some of the confusion also comes from the fact that the term should technically be daylight-saving time. Daylight modifies saving, but the hyphen has been lost to time and everyday usage. Think of similar terms, such as life-saving CPR or money-saving coupon. Now remove the hyphen and add an “S.” Life savings CPR and money savings coupon don’t sound right — because they’re not.

When you don’t hyphenate daylight saving time, it doesn’t read naturally as a compound adjective. That’s one reason why people don’t spell (or say) it correctly.

What Does “Daylight Saving Time” Mean?

Beginning shortly after World War I in the United States, daylight saving time describes the period between spring and fall when you extend daylight hours during the summer months. This involves advancing clocks one hour forward in the spring and winding them back in the fall.

As a phrase, daylight saving time can be a bit misleading. Advancing the clock forward an hour doesn’t actually save daylight. It just extends the clock so that sunset (and darkness) falls later in the day.

When we are not in daylight saving time, we’re in what’s called standard time. This is also sometimes referred to as normal time or winter time.

“Spring Forward” vs. “Fall Back”

The transitions into and out of daylight saving time are accompanied by the phrases spring forward and fall back. These are mnemonic devices to help you remember what happens and when.

It’s an easy mnemonic because of the movements involved. It’s spring forward because you generally wouldn’t “spring backward” unless something ahead of you spooked you. Most people tend not to “fall forward” either; hence, fall back.

It’s hard to pinpoint when people started using this mnemonic, but it goes back at least to the early 20th century.

When Is Daylight Saving Time?

While the exact date will change, DST starts and ends at the same time every year in the United States. It always begins on the second Sunday in March at 2:00 a.m., and it ends on the first Sunday in November at 2:00 a.m.

It should be noted that not all states in the U.S. observe daylight saving time. Hawaii and Arizona (except for Navajo territories) are permanently on standard time.

The Sunshine Protection Act was a bill that intended to make daylight saving time permanent all year round. It was first introduced in 2018. Most recently, the bill was presented again in March of 2022, when it unanimously passed in the Senate. However, it hasn't yet made it past the House.