Words You Think Help Your Writing (But Kinda Make It Worse, Actually)

Do people roll their eyes after talking to you? It may not be your argument that they’re reacting to — it may be those extra-annoying words sprinkled into your vocabulary. Some of these words may just be overused and pretentious, but others may make you sound like you have no idea what you’re talking about. 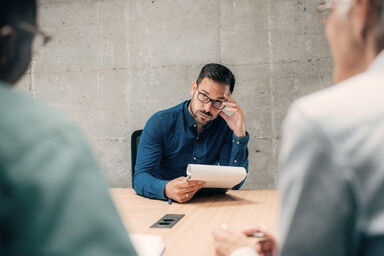 The source behind the Ackchyually Meme, the word actually is often found in the beginnings of arguments where the speaker is correcting someone about a trivial point. Whether you find yourself interrupting strangers’ conversations to “actually” them or you use the word a lot for emphasis, it’s bound to be off-putting. Use it sparingly when you actually need it (like that) or avoid it altogether.

Apropos of nothing means “without reference to anything” and typically introduces a non sequitur, or unrelated comment, to a conversation. It’s a perfectly good Latin phrase that’s been overused by sciolists and know-it-alls — to the point where people use apropos as a transition between any two topics at all. If you use this phrase a lot, stop (or make sure you’re using it correctly).

Another Latin phrase that sounds great when used correctly (and irritating when used a lot) is ergo, meaning “therefore.” Someone makes a point, then another point, and “Ergo — we should go out tonight.” But despite being a satisfying transition word to say, the word ergo makes you sound a bit snooty outside the legal profession. Stick to the good old coordinating conjunction so, and avoid any raised eyebrows from non-lawyers.

Both explicate and explain involve revealing details to someone, which may lead you to believe that they’re synonyms. And in some situations, they are — just not your everyday, run-of-the-mill situations. When you’re telling someone what a book is about, you’re explaining it. But when you’re doing a college-level analysis on the universal themes, nuanced motifs and dynamic characters of the book, you’re explicating it. Unless that’s what you mean, say explain.

“Let’s finalize these plans by Friday,” says the boss, and everyone nods except for you. Why does he insist on saying finalize when he could just say finish? The answer is that he wants the project to sound complex and important, just like the word finalize. Don’t let these synonyms trick you into using overtime for a project that’s not that big of a deal.

Methodology is a big, fancy word that looks a lot more significant than method. Can you use it to dress up your writing just a little? Sure — if what you’re talking about is the analysis of every procedure you’re using in a scientific research study. If you just mean “the way I did this thing,” use the word method to avoid injuring a professor’s rolling eyes.

Per se is a Latin phrase that means “in itself,” but it’s almost never used that way. Like ergo, it’s a swanky-sounding way to transition between ideas (as in “That’s not a bad idea, per se, but let’s keep brainstorming”). Only use per se if you’re trying to say “by itself” — and even then, limit it. You’re probably correct, but at what cost?

It’s possible to use utilize correctly, especially when you’re describing the practical use of a tool or object (“Apes utilize their thumbs to peel fruit more effectively”). However, if you’re using it to pad your writing and make use sound better, it’s best to avoid the word altogether. The same goes for the extra-long noun utilization, which makes you look oh-so-smart on paper (unless you could just use the noun use for the same purpose).

Not All Words Are Worth Using

When shaping up your vocabulary, try not to include these words: