Yes, You Can Just Be ‘Whelmed’

If a date took you to a fancy restaurant, you could be both overwhelmed (“A bottle of wine costs how much?”) and underwhelmed (“You’d think a $90 steak would have some flavor”). But can you just be whelmed? It’s tempting to say no, but you’d be wrong — in fact, whelmed has been around a lot longer than its over and under siblings. 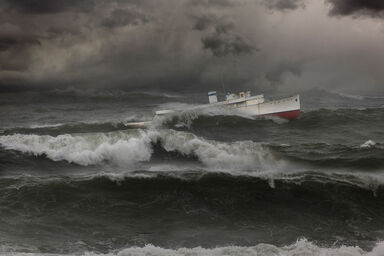 Whelm is an archaic word that means “to engulf or submerge,” especially in the context of water. For example:

When you add the prefix under-, you get underwhelmed, a synonym for unimpressed (“I’ve been underwhelmed by your work this quarter”). But when you add over- to whelmed, you get overwhelmed, which means “to inundate or engulf.” Wait — isn’t that pretty close to the definition of whelmed? Let’s try it out:

Looks pretty good, right? Overwhelm describes both literal and figurative drowning (as in “I’m overwhelmed with gratitude” or “He’s overwhelmed with work”). So how did we go from whelm to overwhelm — especially when they seem to mean the exact same thing?

Whelmed: Wives, Whales and Whatever

Like anything worth mentioning, the whelm journey begins with Shakespeare. The Bard used whelm in The Merry Wives of Windsor in a sailing metaphor:

PISTOL. This punk is one of Cupid's carriers;
Clap on more sails; pursue; up with your fights;
Give fire; she is my prize, or ocean whelm them all!

But in pursuit of those far mysteries we dream of, or in tormented chase of that demon phantom that, some time or other, swims before all human hearts; while chasing such over this round globe, they either lead us on in barren mazes or midway leave us whelmed.

However, Melville also uses overwhelmed three times as a synonym for whelmed:

There is his home; there lies his business, which a Noah’s flood would not interrupt, though it overwhelmed all the millions in China.

So where does that leave us? Like Melville, many 19th-century writers found themselves choosing overwhelmed instead of whelmed. After all, overwhelmed sounds much more dramatic and a bit more poetic version of the similar-meaning overcome — and writers are apt to go for drama and poetry every time.

While modern characters from movies like 10 Things I Hate About You and shows like Young Justice may ponder the loss of whelmed, the English population prefers overwhelmed to express the exact same sentiment (minus the water).

Once you know that whelm means “engulf,” it’s hard to look past the fact that overwhelm basically means “to double drown” or “to inundate and then inundate again.” Overwhelm is an example of pleonasm — a tautological phrase that includes two words that mean the same thing. Writers often use pleonasm to emphasize a point, as Melville did when he chose overwhelm instead of whelm, but it doesn’t change the fact that overwhelm repeats itself a little bit.

It’s Not the Only Phrase That Does This

So why aren’t English teachers up in arms about overwhelmed? Even though it’s redundant, overwhelmed is a much more acceptable word than whelmed. And it’s not the only example of pleonasm that you’ll see on a daily basis (all of which are acceptable, unless you’re an English teacher, in which case prepare to be annoyed). More pleonastic phrases include:

While it’s probably too late to exchange whelm for overwhelm from your vocabulary, there’s still time to comb through these other repetitive phrases. The next time you scan your writing, see how many words you can eliminate while still making your point (it’s more than you think).

Feeling whelmed by your growing vocabulary? Stay above water with these resources: