Modal Verbs: Key Types and How They Function

You probably already know that verbs are words that convey action. But what action do modal verbs such as can, might and should convey? How do they fit into a sentence? Learn all about modal verbs with a helpful explanation and clear grammatical examples. 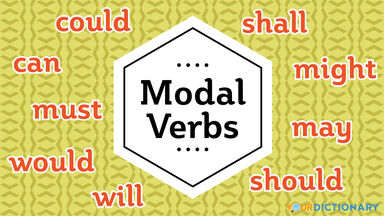 What Is a Modal Verb?

Modal verbs are auxiliary verbs, also known as helping verbs. They work with other verbs to show various conditions, such as possibility or necessity. Modal verbs do not change form based on the verb tense of the sentence; they do not have conjugated forms.

The modal verbs in English are:

Modal verbs can only function on their own if the main verb is obvious. For example, the sentence “Taylor can” doesn’t make sense on its own. But when it follows the sentence “Who can help me?” then the reader understands that the sentence is really “Taylor can help.”

Examples of Modal Verbs in Sentences

You see modal verbs everywhere you look — probably without even realizing it! Modal verbs show modalities such as possibility, necessity, ability, permission, and suggestion. Some can be used in many different ways, while others only work in one or two contexts.

The modal verbs could, may and might indicate that there is a possibility or probability that something will happen.

When you exchange these verbs for other modal verbs, such as will and shall, they indicate a promise or certainty that something will happen.

You’ll often find modals used this way in the conditional mood, which states that something might happen if another event happens as well. For example, “I could pass this class if I study” changes the possibility (passing the class) based on what needs to happen first (studying).

You can use the modal verb must or should to indicate that something needs to happen. It functions like the expression “have to” to show an obligation or necessity. When you add “not,” it indicates that something should not happen.

Can is the main modal verb that shows one’s ability to do something. If you can replace can with “able to,” it’s being used as a modal of ability. Its negative form, cannot (or can’t), shows the opposite.

Modal verbs can be used to ask permission or grant permission. These verbs include could, may, shall, and would. Granting permission usually uses the modal may.

Some speakers add can to this list, as in “Can I spend the night at David’s house?” Strict grammarians believe that may is the proper modal verb to use in these cases, as can is traditionally a modal of ability. However, the rules regarding can vs. may have loosened up to allow can as a modal of permission in informal cases.

Another use of modal verbs is to make suggestions. Use could, might, must, and should to make a suggestion or give advice, often with the verbs “want to” or “consider.”

You can also use modal verbs of necessity in imperative sentences. Must and should are commonly found when a speaker gives advice or makes commands.

You can even use modal verbs to think about past events! Past modal verbs, such as could, might, should, and would use the word “have” with a past participle to discuss something that was once possible, needed, able to be done, or permitted but no longer is.

Past modal verbs such as may and might can also speculate about something that has happened. As in other modal examples, adding "not" makes the sentence negative.

Some modals, such as can and shall, don’t work as past modals. Use could have and should have in these cases.

Will appears in all future verb tenses. Use will with a present tense verb to form the basic future tense.

You can create the future perfect tense with will, the word “have” and a past tense verb.

And finally, the future perfect progressive tense comes from the modal will, the phrase “have been” and a present participle ending in -ing.

As you can see, these verb forms aren’t as common in everyday speech. But you may be surprised to find how often you hear will when referencing the future!

Does it seem like there are some words missing from the list above? Several English verbs and expressions function just like modals. They are sometimes called semi-modals, and they include:

Some of these expressions, particularly ought to, are sometimes included in lists of modal verbs. However, they are less common and more conversational than modal verbs.

Modal verbs show intention, rather than action. When used with other verbs in the sentence, they can make your meaning as clear as you want it to be. Test your knowledge of modal verbs with an examination of may vs. might. You can also make sure you’re using can vs. could correctly in your writing and everyday speech.