A or An? Rules and Exceptions for Using Indefinite Articles 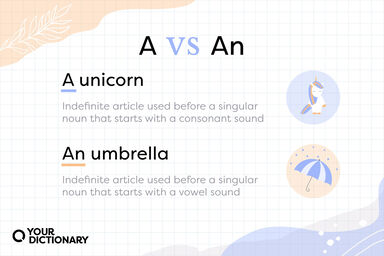 A (Unicorn) versus An (Umbrella) With Example And Definitions
Advertisement

A and An: Know the Difference

Both a and an are indefinite articles for singular nouns. When the next word begins with a consonant sound, you use a. You can tell when to use an instead of a if the next sound is a vowel sound.

A misunderstanding of the rule is that you need to pay attention to the actual letter of the next word. In reality, it’s the sound of the word that you should follow when deciding to use a or an.

Examples Using A in a Sentence

The article a typically comes before a word that begins with a consonant sound. Examples of when to use a include:

Examples Using An in a Sentence

Use an when the next sound begins with a vowel sound. For example:

Using A or An Before Acronyms

Just like in other words, you are listening for the initial sound, not necessarily the letter when writing acronyms. Take a look at these examples of acronyms in which you pronounce each letter individually (also known as initialisms).

If you say the acronym as a single word, such as NATO or AIDS, refer to the first sound of the word: a NATO treaty and an AIDS treatment. It may seem complicated, but as long as it sounds right, you are probably on the right track

Which Article Should You Place Before H?

It’s hard to tell whether you should use a or an before “h” words. The rule dictates that if the first syllable is not stressed, you can use an. Additionally, some words have the “h” sound at the beginning, while it is silent in other words.

When to Use An Before a Word Beginning with H

Even though they all begin with the consonant “h,” these words use the article an:

When to Use A Before a Word Beginning with H

When the first sound is a hard “h,” the article will almost always be a.

A tricky word not listed above is historic. That’s because the "h" is not silent, but the first syllable is also not stressed (hi-STOR-ic). However, many people write and say "an historic" and the grammar is widely debated. Ultimately, "a historic" is preferable. Another word with French etymology, hotel, falls into the same trap. A is technically the correct article to use with both words, as in “a historic moment” and “a hotel.”

Exceptions to the Rule

Words That Make a You Sound

Some words that begin with vowels don’t actually start with a vowel sound. In these cases, their beginning sound that is pronounced like "you" is actually a consonant sound, which then requires the article a. Some of these words are:

It’s natural to see the vowels when writing and automatically add an. But, try saying each word out loud. You’ll find that "an union" doesn’t sound correct at all.

Words That Make a W Sound

Another instance of consonant-sound words hiding as vowel words are words that make a "w" sound but begin with the letter "o." There are only two words in English that fit this description: once and one. You can remember this by recalling that “one” rhymes with “won,” which begins with a consonant. Use the article a in these instances:

More Resources on Parts of Speech

Now that you’ve mastered indefinite articles, make sure that the rest of your parts of speech are in order. These parts of speech examples are a great reminder for writing exercises. You can also learn the six spelling secrets that English teachers would love for you to know.