Aboriginal vs. Indigenous: Is There a Right Choice?

As we shift to language that is more inclusive and aware of the diverse peoples that make up this world, more people have begun to use the words indigenous and aboriginal to refer to native populations and their descendents. There are differences between aboriginal and indigenous that should affect how you actually use those words. 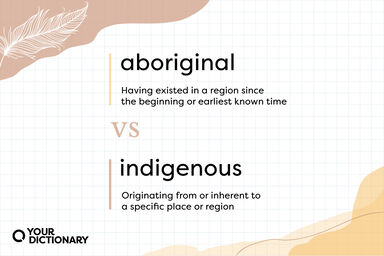 You Should Generally Use ‘Indigenous’

When referring to the collective group of people, Indigenous with a capitalized “i” (especially Indigenous peoples) is the preferred term, especially in the United States. More people see Aboriginal as insensitive because the term is historically rooted in colonialism and racism.

Aboriginal also runs into the problem of lumping an extremely diverse population of different tribes into a singular monolithic group. Indigenous peoples at least acknowledges that there are different peoples within this group.

Indigenous: Inherent to a Place

Indigenous as a general term refers to something that is inherent to a specific place or region. The word comes from the Latin word indigena meaning “sprung from the land; native.”

The lowercase indigenous can refer to everything from food to flowers. For example, you can find avocados just about anywhere these days, but they are indigenous to Mexico and Central America.

When presented with an uppercase “i,” Indigenous refers to culturally distinct communities and societies whose members were the original inhabitants of a specific place.

For instance, Indigenous peoples in the United States include people descending from any of the 574 tribes who originally lived on this land. The Māori people are one of the Indigenous groups in what is currently New Zealand. There are over 370 million Indigenous people all over the world.

Aboriginal: Since the Beginning

A slight difference from indigenous, aboriginal refers to plants, animals or people that have existed in a region since the beginning or the earliest known time. Aboriginal comes from Latin aborigines, meaning “the first inhabitants.”

With an uppercase “a,” Aboriginal has been used to refer to Native and Indigenous people and is more common in Canada and Australia than the U.S. In modern times, Aboriginal on its own is seen by some as insensitive and too non-specific.

For example, in Australia, Aboriginal has been used as an umbrella term for over 500 distinct tribes with their own cultures, languages and beliefs. The Canadian Constitution recognizes three different groups as “Aboriginal”: First Nations, Métis and Inuit.

When to Use ‘Aboriginal’

However, some communities don’t have a problem with Aboriginal or Aboriginal peoples. For example, some Australians prefer “Aboriginal and Torres Strait Islander peoples” over Indigenous.

Where ‘Native’ Fits In

Native, which means “belonging to a place by birth; innate,” is often used interchangeably with indigenous. When referring to the group of people, Native or Native peoples is also acceptable and generally on par with Indigenous peoples.

Native American is still used and accepted, but it is growing out of favor with some, partly because the concept of “America” and states didn’t exist prior to colonization.

Although Indigenous and Indigenous peoples are the preferred terms by most, they are still umbrella terms. It’s always better to refer to a group by their specific tribe name if you know it. Individual people will also have their own preferences about how they want to be addressed.