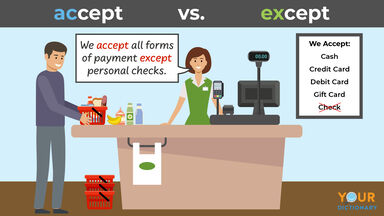 Man Paying in Grocery Store accept versus except example
Advertisement

How to Use Accept and Except

Accept and except are commonly confused words that are spelled differently and pronounced differently. Most importantly, they have nearly opposite meanings.

Accept only has a verb form, while except functions as multiple parts of speech (including verb, preposition and conjunction).

Accept (ăk-sĕpt') is a verb with several different meanings, all of which involve taking or recognizing something or someone. Accept can mean:

Using Accept as a Verb

When using accept in a sentence, remember that it always functions as a verb.

Except Meanings and Pronunciation

The word except (ĭk-sĕpt') is most commonly used as a preposition. It can also function as a conjunction or as a verb. The word except has a few different definitions, all of which involve excluding something or someone.

Using Except as a Preposition

When you use except as a preposition, it connects a noun to the rest of the sentence. Except indicates that the noun that follows is not included in the action of the sentence. For example:

Using Except as a Conjunction

Except as a conjunction means "but." It's usually followed by a clause that starts with that, for or when. For example:

Using Except as a Verb

A less common function of except is as a verb, when it means "to exclude." This usage can get confusing with accept, which is also a verb but has the opposite meaning. For example:

Accept the Challenge — No Exceptions

Accept and except are two tricky words in the English language, but when you master their meanings, you'll use them correctly every time. Use a commonly confused words worksheet to identify which similar words you have already mastered and which ones you might need to review. Then, move on to exploring other similar words with an "e" or "a" at the beginning such as affect vs. effect.