Accessory vs. Accomplice: Investigating the Difference

Whether you’re a fan of crime stories or you’ve tangled with the law yourself, you’ve probably heard the term “aiding and abetting” once or twice in your life. Aiders and abetters help the main perpetrator of a crime, known as the principal, break the law. Legally, aiders and abetters fall into two categories — accessories and accomplices — depending on whether or not the person was at the crime scene. 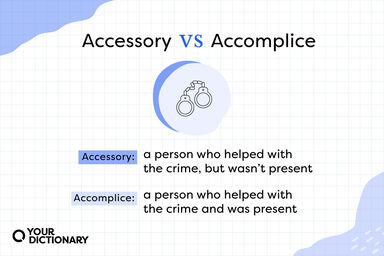 An Accessory Wasn’t Present At the Crime

If the person helped a principal plan or cover up a crime, but wasn’t physically present at the crime, they’re considered an accessory. The word comes from the Latin accessorius, meaning “an additional thing,” and like a hair accessory or fashion accessory, an accessory to a crime helps pull things together.

There are two types of accessories involved in a crime:

Examples of Being an Accessory to a Crime

A person would legally be considered an accessory to a crime if they:

An Accomplice Helped Commit the Crime

An accomplice also helps a principal commit a crime, but unlike an accessory, they are present at the crime scene. Accomplice comes from the Latin complicare, meaning “to involve,” and the Old French complice, meaning “partner.” A related word is complicit, meaning “partner in wrongdoing.”

Examples of Being an Accomplice to a Crime

Situations where someone involved with a crime would be considered an accomplice include:

Which One Is More Liable?

Details vary state by state and case by case, but generally speaking, an accomplice faces harsher legal consequences than an accessory. In fact, an accomplice can even be prosecuted if the principal isn’t charged at all. An accessory does face legal prosecution, but the degree of their punishment depends on their knowledge of the crime and its ramifications.

Keep Your Nose — and Your Vocabulary — Clean

Accessory and accomplice aren’t the only confusing legal terms in a trial situation. Clear up any additional misunderstandings with: