Acclimation vs. Adaptation: Getting Used to Using the Right Word

Acclimation and adaptation both describe the process of becoming accustomed to a new environment, or changes in an old environment. Even though they sound very similar, their biological and sociological definitions differ — so much, in fact, that one process may take weeks while the other takes several lifetimes. So which is which? 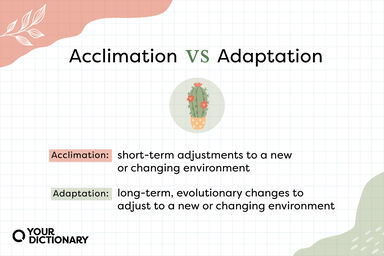 Main Differences Between Acclimation and Adaptation

You can distinguish between the processes of acclimation (“to adapt to a new climate”) and adaptation (“to modify oneself to fit new circumstances”) in the following ways:

The process of acclimation involves minor changes that an organism makes to better fit into their environment. The word acclimation comes from the Greek klima, meaning “region,” and from the French acclimater, meaning “to adapt to a new environment.” It’s used more often than its biological synonym, acclimatization, although that term is now preferred when discussing biological changes to a new climate.

Acclimation can refer to an animal or plant that is trying to survive in a new environment, or it can refer to a person’s tendency to adopt the characteristics of a new culture in order to fit in. For example:

Unlike acclimation, the process of adaptation doesn’t take place within one organism’s lifetime. In fact, it may not take place within ten lifetimes. Adaptation refers to a long-term, genetic change that a species undergoes across many generations. It comes from the Latin adaptare meaning “to adjust,” and while the general term adaptation can refer to shorter processes (such as a book becoming a movie), when used biologically, it refers to this type of permanent evolutionary change as a result of natural selection.

Another difference between acclimation and adaptation is that adaptation is not reversible. For example, one way snow leopards have adapted to a snowy environment is by growing very thick coats and large paws to stay on the snow’s surface. Those changes are the result of many generations of genetic adaptations and aren’t reversible within one snow leopard's lifetime.

Every animal and plant you see today is alive because of the process of adaptation. Otherwise, their species would never have been able to survive through the many climate and atmospheric changes in Earth’s history. Examples of adaptation include:

What About ‘Acclamation’ and ‘Adoption’?

If you’re a biologist or sociologist, the difference between acclimation and adaptation is obvious (especially when you track a change over many millennia). But the rest of us may accidentally use these similar-sounding words interchangeably and ignore their differences. The next time you’re stuck between acclimation vs. adaptation, look at the “climate” hiding in acclimation: If you were visiting a new climate, you’d probably be able to adjust to it pretty quickly, rather than leaving it to your great-great-great-grandchildren.