Adverse vs. Averse: Dealing With the Difference 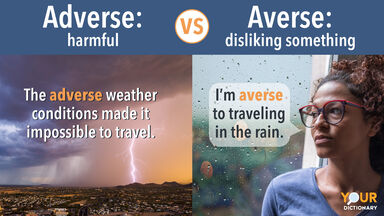 The Difference Between Adverse and Averse

The words adverse and averse come from the Latin root vert-, meaning "to turn." But their similarities end when it comes to their meanings.

The difference between adverse and averse lies in their prefixes. The prefix ad- means "toward," indicating that an adverse situation is bringing danger toward you. However, the prefix a- means "away," making averse the act of turning away from something.

An Easy Way to Tell Averse and Adverse Apart

If you're struggling with the difference between these similar-sounding words, try out these tricks.

When to Use Adverse

The adjective adverse typically describes things or situations. You would not describe a person as adverse, no matter how annoying they are!

Examples of adverse (and its adverb form, adversely) in a sentence include:

When to Use Averse

You use averse when you're describing a person's negative reaction to something. For example:

If you feel that using adverse and averse makes your writing sound a bit pedantic, try their noun forms instead. Using adversity and aversion gets the point across in the same way, and they're harder to mix up as well. For example:

Don't Be Averse to Improving Your Vocabulary

Have you had an aversion or two when it comes to grammar and vocabulary? Don't worry — mastering language arts doesn't need to be an adverse experience! Now that you've figured out the difference between adverse and averse, try learning more about allude vs. elude.