Agnostic vs. Atheist: Simplifying the Differences

Religion is a significant part of billions of people’s lives, but there are also many millions who do not believe in a higher power or who cannot say one way or the other if there is a god. The terms agnostic and atheist are often confused, misused or misunderstood. Learn the difference between these two terms and how to use agnostic and atheist correctly. 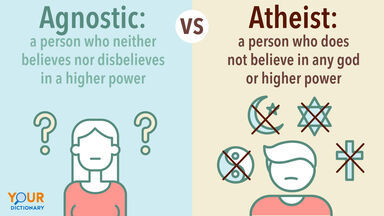 The Difference: Agnostic vs. Atheist Meaning

Agnostic and atheist are often confused or even used interchangeably, but this is incorrect. These terms have distinct meanings that describe two different philosophies.

Meaning and Usage of Agnostic

An agnostic is a person who does not believe or disbelieve in a higher power, but rather acknowledges that they do not and cannot know or prove for certain whether a divine being or beings exist.

History and Etymology of Agnostic

Thousands of years later, influential philosophers such as David Hume, Immanuel Kant and Søren Kierkegaard published speculative philosophy about not being able to prove the existence or nonexistence of any god. The term agnostic was officially coined by English biologist T.H. Huxley in 1869. Huxley defined agnosticism as:

"Agnosticism is of the essence of science, whether ancient or modern. It simply means that a man shall not say he knows or believes that which he has no scientific grounds for professing to know or believe. Consequently, agnosticism puts aside not only the greater part of popular theology, but also the greater part of anti-theology."

The 19th and 20th centuries saw the rise of many other famous and influential agnostics including Charles Darwin, Robert Ingersoll and, arguably, Albert Einstein.

Using Atheist in a Sentence

An atheist is a person who lacks belief in a god or higher power or denies the existence of a higher power and the concept of creationism. The term comes from the Greek adjective átheos meaning “godless” or “without gods.”

Like agnosticism, atheism is a very old ideology that rejects the notion of a higher power. American Atheists defines atheism as follows:

Atheism can be traced back to ancient Greece, and the concept increased in popularity from the 19th century onwards as a result of the Age of Enlightenment and the writings of philosophers such as Friedrich Nietzsche, Karl Marx, Bertrand Russell, Richard Dawkins, and many more. As with all other belief systems, there is no one-size-fits-all with atheism. There are several definitions and types of atheism as some atheists simply disbelieve in the existence of a god or gods while others deny the existence of any kind of spiritual or supernatural entities. Today, approximately 7% of people worldwide consider themselves either agnostic or atheist.

What About Theist and Deist?

As if agnostic and atheist weren’t confusing enough, they are also sometimes mixed up with theist and deist.

Whether you are discussing religion or politics or writing an essay for school, using the correct word is crucial. Explore other words that are frequently confused or used interchangeably such as systemic and systematic or emigrate and immigrate. If you are curious to learn more about different religious ideologies, discover the five main world religions and what sets them apart.