Allude vs. Elude: Avoid Mistakes by Knowing the Difference 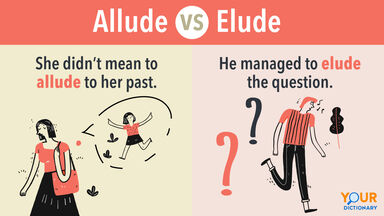 Remember the Difference: Allude and Elude

Allude and elude are homophones, words that sound the same or similar but are spelled differently and have different meanings. They are also both verbs.

How to Use Allude in a Sentence

Allude can mean “to suggest,” “infer” or “hint at” something. Allude is the verb form of allusion. Allusion is also a literary device that references a person, place, thing, or idea, including other literary works, historical events or mythology.

How and When to Use Elude

When you elude something, you avoid or get away from it. This can apply to someone physically escaping something or more abstract things like thoughts or sleep.

What About Allusion and Illusion?

Other similar terms include allusion and illusion. As previously mentioned, allusion is a device used to directly or indirectly reference things, often in literary works.

Illusion, on the other hand, is a distorted impression or false perception of something.

Master the Words That Elude You

If other deceptively similar words elude you, read up on more homophones like affect and effect where spelling makes all the difference. Then, check out what distinguishes enquire and inquire besides their spellings.