Alot vs. A Lot: Only One Is Correct

You may have typed a lot and wondered if it should be alot. Or maybe you texted alot to someone and it didn't look quite right. Only one is a real word — but which one? Learn how to choose between alot and a lot with a helpful guide. 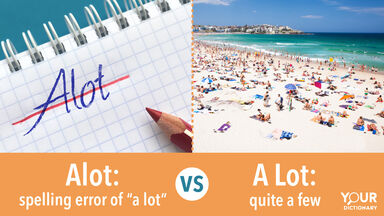 Should You Use Alot or A Lot?

A lot is the right choice when you're describing a large quantity. Alot is a misspelling of a lot. You should always put a space between a and lot when writing a lot. For example:

Why Do People Misspell A Lot?

If a lot is the right choice, why is alot so common in texting and writing? People often confuse a lot with the verb allot, which means "to give or provide." You'd use allot in the following ways:

When people write "I have allot of homework," it doesn't look correct (and it isn't.) So they take out one "l" to make it alot — which also isn't correct but due to its steady popularity often looks just as good as a lot.

Meaning of A Lot: Quite a Few or Very Much

You'd use a lot when describing a large amount of something. You can also use it to mean "very much." While a lot is a noun phrase (article + noun), it functions in a few different ways in a sentence.

How to Use A Lot as a Noun and Pronoun

A lot functions as a noun in a sentence when referring to a large quantity. You can pair it with another noun (usually an uncountable noun) to explain more about it. For example:

In these cases, the nouns have either been stated or are understood by the speaker and listener. When a lot stands in for another noun, it's functioning as a pronoun.

How to Use A Lot as an Adverb

A lot also functions as an adverb of quantity. It answers the question "how much?" in a sentence (in this case, very much). For example:

When using a lot as an adverb, the word of doesn't follow because it's not describing another noun. As an adverb, it's intensifying the action in the sentence.

Variations of A Lot

You may find that several versions of a lot come up in both informal and formal writing. They all have a similar meaning to the original a lot — "a large amount" or "very much."

A Tip To Avoid Using Alot

The best way to lose the incorrect alot from your vocabulary is to think of the phrase "a lot of space." The word alot doesn't have a lot of space, but look at all the space in a lot! You could fit a whole letter in all that space.

Learn a Lot About Grammar

While alot may save you time while texting or emailing, it's going to cost you in formal writing. Alot vs. a lot is an easy error to make and an even easier one to catch, and too many grammar mistakes may be distracting for your readers. Clear up more grammar misunderstandings with a guide to alright vs. all right (hint: never use alright).