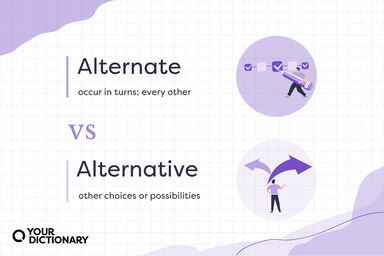 The Difference Between Alternate and Alternative

Alternate and alternative are understandably confused and can be used interchangeably in certain contexts, but it is important to note that they can have different meanings that apply to different situations.

Meaning and Usage of Alternate

Alternate comes from the Latin word alter, meaning “other.” This word evolved into alternus (“every other”), alternat (“done by turns”) and finally alternate, which means “every other” or “occurring or succeeding in turns”.

How to Use Alternative in Context

As an adjective, alternative (pronounced awl-tur-nuh-tiv) means “a choice between two or more things” or “another possibility.” The latter meaning can refer to things like alternative music and alternative medicine to indicate they are an alternate to mainstream music or medicine. In its noun form, alternative is pronounced the same way and also means “two or more choices.” The difference comes down to its placement and part of speech in the sentence.

When to Use Alternate and Alternative Interchangeably

Alternate and alternative can sometimes be used synonymously when referring to something “other,” whether that is another option or something different.

As with other similar words, alternate and alternative are often used interchangeably. However, while their meanings are somewhat similar, it is important to remember that alternate refers to something that occurs in turns and alternative means another choice or way of doing something. While you're here, check out words like preventative and preventive and continually and continuously—explore the differences between these terms and how to use them in a sentence.