At first glance, amiable and amicable look like they could be different forms of the same word. Indeed, their meanings are quite similar. However, their meanings differ and so do their uses. 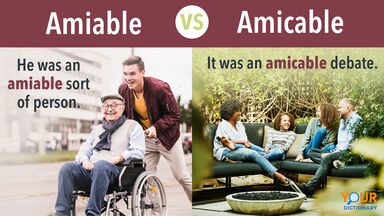 The Difference Between Amiable and Amicable

When and How to Use Amiable

Amiable is defined as “having a friendly disposition” or someone or something that is “agreeable.”

Using Amicable in a Sentence

The adjective amicable usually refers to the relationships or interactions between people and means “pleasant” as well as “without disagreement or discord.”

Amiable and amicable are understandably sometimes used interchangeably since they both refer to friendliness and pleasantry. However, there is a way to remember the distinction between them.

The only difference between the spellings is a “c.” Since amicable applies to events and situations between multiple people, you can associate the “c” with words like “crowd” or “crew.”