Among vs. Amongst: Main Differences and When To Use Each

Are you among friends or amongst friends? Both words indicate that you’re in a safe place with your best buds. But that doesn’t mean among and amongst are interchangeable — and depending on your writing style and audience, you’re better off choosing one over the other. 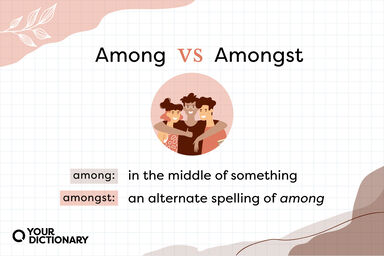 Friends With Among vs Amongst Definitions
Advertisement

Use ‘Among’ to Describe Being in a Group

Although both among and amongst are acceptable prepositions in modern English that mean “in the middle of” or “in a group,” among is the preferable word choice. It first appeared in Old English in the 12th century as onmang (meaning “in”). Today, among is much more popular than its sound-alike amongst. If you’re trying to decide between among and amongst, you’re probably looking for among.

Examples of ‘Among’ in a Sentence

Use the word among to describe the group one is in. For example, if you’re “among colleagues,” you’re in a group of colleagues. Additional examples include:

Where Did Amongst Come From?

Many people think that amongst is actually the older word of the two. The mistake is understandable — after all, amongst seems more archaic than among. But actually, amongst appeared in English more than a century after among, from the Middle English word amonges.

Examples of ‘Amongst’ in a Sentence

While among and amongst share a definition, you’ll find that using amongst adds a formal tone that you may or may not want in your sentence. For example:

Now that you’ve got among and amongst settled, what about between? There’s a key difference between among and between that keeps them from being synonyms:

Another difference lies between the words among and amid. While their definitions are similar, their grammatical functions differ slightly: