Amoral vs. Immoral: Learn What's Right and Wrong in Usage 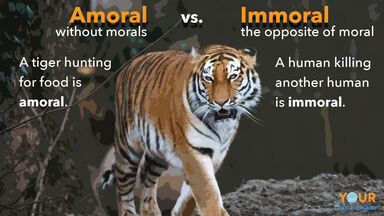 What Is a Moral?

The word moral comes from the Latin word moralis, later the Old French moral, which means "proper behavior" or "relating to manners." It describes the way an individual is expected to behave in terms of right and wrong. In sociology, morals translate to social mores — widely observed norms in a society.

Amoral means "without morals." It attaches the prefix a- to the root word "moral," just like the adjectives apolitical (without politics) and atypical (not typical). It describes someone who lives outside of a society's moral code. Their behavior is not based on what is right or wrong; they may not even know the difference.

Examples of amoral in a sentence include:

Don't mix up amoral and "a moral." That important space changes the adjective amoral to a noun with quite a different meaning.

Immoral means "against morals." Like in the words impossible or impatient, the prefix im- indicates that an action is the opposite of a moral behavior. Someone who commits an immoral act knows the difference between right and wrong and chooses to do the wrong thing on purpose. Unlike an amoral person, an immoral person knows better.

Some examples of immoral in a sentence include:

In addition to amoral vs. immoral, you may also encounter the adjectives unmoral and nonmoral. These are real words, and while they are similar to amoral and immoral, there are slight usage differences, which are:

As you can see, amoral and unmoral are somewhat similar. They both describe a situation where someone may or may not know what's right or wrong, so their behavior doesn't demonstrate a moral choice. Nonmoral indicates that a situation doesn't have a moral standing, such as picking out a pencil or going to sleep.

Use these sentences to help you tell the difference:

See how the examples work with animals here:

Notice that only humans can be immoral. That's because only humans abide by a sense of right and wrong. Computers, animals and even babies aren't capable of making moral decisions, so their choices are all amoral (or unmoral).