Anyone vs. Anybody: Main Differences You Need Know

The words anyone and anybody are very similar. For the most part, these terms can be used interchangeably. Discover the main difference between anyone vs. anybody, along with tips on how to correctly use these terms in spoken and written communication. 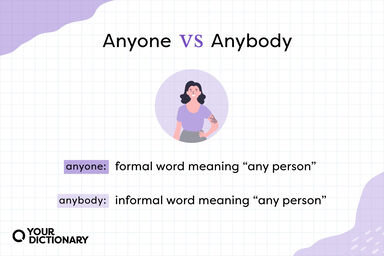 Woman With Anyone vs Anybody Definitions
Advertisement

Anyone vs. Anybody: Similarities and Differences

The words anyone and anybody are more similar than they are different. There are no definitive rules regarding when you should use one of these words vs. the other.

Because these words are so similar, it doesn't matter which word you use in most situations. You can use either word in face-to-face conversations, when writing dialogue and in many other types of writing. If you are concerned with using the most formal options in certain situations, such as business documents or academic writing, anyone is somewhat preferable to anybody.

Example Sentences With Anyone and Anybody

Review a few example sentences that feature the words anyone and anybody. Since these indefinite pronouns are interchangeable, you could replace anyone with anybody (and vice versa) in any of the sentences without changing the meaning or creating a grammatical mistake.

The phrases "anyone's guess" or "anybody's guess" mean that no one knows the answer. These phrases are used to indicate that an answer or solution is unknown or highly uncertain.

The phrases "anyone else" and "anybody else" are used to refer to any other person. These words are appropriate when one or more people have already been identified and the message speaker is checking to see if any additional person should be included.

Comparing Anyone vs. Anything

Comparing Someone vs. Somebody

The words someone and somebody are closely related to anyone and anybody. Somebody is less formal than someone.

Now that you know the main differences (and similarities!) of anyone, anybody, someone, and somebody, you're on your way to mastering proper indefinite pronoun usage. While you're focused on that topic, spend some time reviewing more examples of indefinite pronouns. Explore other commonly confused terms like everybody vs. everyone. Then, test your knowledge and skills with these indefinite pronoun worksheets. From there, expand your pronoun knowledge even further by exploring the various types of pronouns.