Anyway vs. Anyways: Which Is Correct, Anyhow?

Have you ever written anyways instead of anyway? Many people use these interchangeably, but do they mean the same thing? And which is correct, anyway (or anyways)? The answer is not so straightforward. Discover the difference between anyway and anyways, as well as when and how to use them correctly. 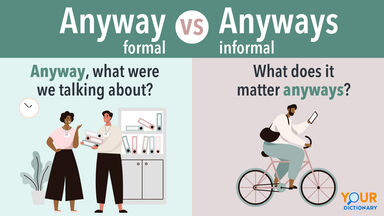 The Difference Between Anyway and Anyways

The tricky thing about anyway and anyways is that, technically, there's no difference between them. They mean the same thing. The only real difference is that one is grammatically correct and the other is a term that is not encouraged in formal writing.

Meaning and Usage of Anyway

Anyway is an adverb. It can be used in an argument to disregard a previous point, introduce a new thought, mean “regardless,” or mean “in spite of.” Anyway is always preferable in formal writing but can be used in more informal situations as well.

Ways to Use Anyways

Anyways is typically regarded as informal speech and grammatically incorrect. However, it is accepted in some casual speech and writing. Anyways can be used in all the same ways as anyway, and it is typically used as a transition from one topic to another or to convey the same meaning as “in spite of.”

What About Any Way?

Any way, written as two words, has a different meaning than anyway or anyways. Any way refers to a particular direction or manner.

Explore similarly confused words like toward and towards or terms that are often used interchangeably such as cannot, can not and can’t. Expanding your knowledge of confusing vocabulary words will help you communicate what you really mean to say.