Apart vs. A Part: An Easy Grammar Guide

It can be hard to know when to use apart (one word) vs. a part (two words), but only because they look so much alike and sound the same when spoken. However, these words actually have very different meanings. Discover what you need to know to correctly use apart. vs a part. 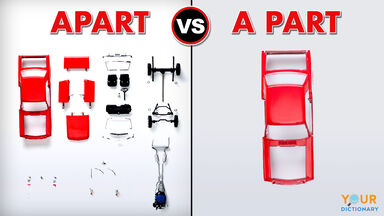 apart vs a part example with car parts
Advertisement

Key Differences: Apart vs. A Part

There are a few key differences that can help you learn how to more easily differentiate a part from apart.

When considering the difference between these two terms, the first thing to remember is that one is a single word while the other is a two-word phrase.

These two terms are not the same part of speech. That information can also help you decide between them.

These two terms have very different meanings. Substituting one for the other could completely change the meaning of a sentence.

Quick Tips for Choosing Apart vs. A Part

When you're writing and aren't sure whether you should use apart or a part, consider these questions and scenarios.

Examples of When to Use A Part in a Sentence

Review these example sentences and explanations to help understand when using a part is the correct choice.

Examples of When to Use Apart in a Sentence

Consider these sample sentences to help you develop a clear understanding of when the word apart can be used.

Learning when to use apart vs. a part is an important step toward mastering proper use of the English language. Once you have mastered the difference, there are plenty of other challenging choices to make. Start with the differences between every day vs. everyday. Move on to learning how to tell the difference between has and have next. After that, focus on discovering when to use this, that, these, and those.