Are you 'Bingeing' or 'Binging' That Show? The Correct Spelling

Your favorite show just dropped a whole new season of episodes, and suddenly, your night just filled up. But when you’re texting your friends to invite them over, should you say you’re “bingeing a show” or “binging a show”? One is more popular than the other — but that doesn’t mean it’s the only one that’s correct. 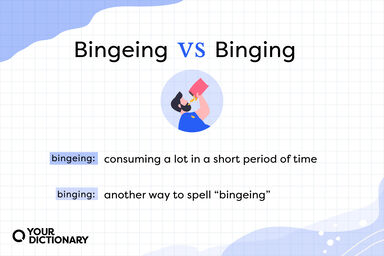 Both bingeing and binging come from the verb binge, meaning “overly indulging in an activity in a short period of time.” They’re both acceptable ways to spell the present progressive form of binge, although binging is more popular online than bingeing.

An Origin in Boats and Drinking

The word comes from 19th-century Leicestershire dialect as a term for soaking a vessel to make the wood swell, thus protecting it against leaks. Later, binge became a figurative word for going on a drinking spree (“soaking in alcohol”), known as “going on a binge.”

Today’s use of binge can relate to alcohol consumption as well, but it also refers to anything from excessive snacking to a serious eating disorder. But depending on the grammar argument you like best, you can be either binging or bingeing.

Argument #1: Why the E Should Stay

Some argue that bingeing is correct because the “e” reinforces the word’s pronunciation with a soft /g/ (like giant or gem). They say that without the “e,” binging could be mistaken for other similarly spelled words, such as:

Binging seems to fit right alongside these -inging words. But bing isn’t a verb, and binging when it rhymes with singing isn’t a real word — so is that a valid concern?

If you prefer the bingeing spelling, these sentences probably look right to you:

Argument #2: Why the E Should Go

The second argument regarding bingeing or binging is that binging is acceptable — and preferable — with context clues from the second. After all, many other words lose their “e” when conjugated to present progressive tense, such as:

No one would pronounce cringing as “cring-ing,” so maybe the “e” doesn’t matter as much. But is that convincing enough to a reader if they confuse binging and bringing?

Those who like binging better may prefer these sentences:

Final Verdict: It’s Up To You

If you were hoping for your spellchecker to solve the bingeing vs. binging conundrum, you’ll find that most prefer binging (but they may think you meant “bringing”). In the end, it’s up to you and your preferences. Choose whichever one looks best to you (or you can just say binge-watching if you want to avoid the issue completely).