Artefact vs. Artifact: Dig Into the Different Spellings

Over the years, archaeologists have uncovered remarkable ruins and relics called artifacts. Or are they artefacts? The spelling of this word is almost as mysterious as the ancient objects themselves. 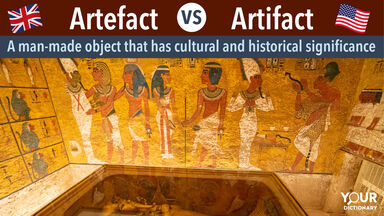 Uncover the Difference Between Artefact and Artefact

When and How to Use Artefact and Artifact

An artefact is a product of another time or place. The term usually refers to a man-made object, but it can also be used more broadly. In more technical terms, artefact can refer to byproducts or results of a process. This meaning usually applies to technologies such as digital images, data, goods, and more.

Artifact has the same meaning as artefact. Although it is the standard American and Canadian spelling, it is actually used in British English as well—although they do have a slight preference for artefact. Otherwise, they are used in the same way in the same contexts.

Tricks to Tell the Difference

Artefact is British English and spelled with an “e.” You can remember that England and Europe begin with “e” and that is where you would use the artefact spelling. Ultimately, when in doubt you can just default to artifact, since it is accepted in both American and British English.

Language and the spelling of words is always evolving. Sometimes words become artifacts (or artefacts) themselves and become lost to time. Explore some words that are spelled differently in American and British English. These include blond and blonde and modelling and modeling, among many others.