Asocial vs. Antisocial: Let's Talk About It

You’ve probably heard someone who doesn’t enjoy the constant company of others called an introvert or someone who lacks empathy referred to as a psychopath. However, you’re less likely to hear asocial or antisocial in daily conversation when these may in fact be the more accurate words to use. These terms each describe different mental conditions or behavioral traits. 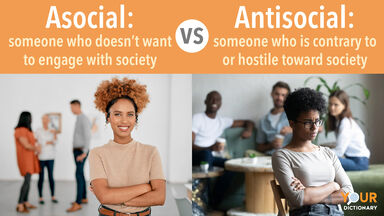 The Difference Between Asocial and Antisocial

While asocial and antisocial look similar and may even be used interchangeably, they each describe separate behaviors with different characteristics.

Difference Between the Prefixes a- and anti-

The difference between asocial and antisocial boils down to their prefixes a- and anti-. These Latin prefixes distinguish the meaning of the words, and knowing their meanings can help you tell these terms apart.

Meaning and Usage of Asocial

Asocial is a personality trait that refers to "a person who doesn’t like to interact with people or engage in social gatherings, is indifferent to society or who withdraws from society." Unlike introverted people who may seek social interactions but need time by themselves to “recharge,” people who are asocial tend to be disinterested in or adverse to social interaction with others.

Antisocial is defined as "someone who is antagonistic toward or even a threat to society." It can also refer to people who are unable or unwilling to associate with others, not to be confused with asocial. Additionally, antisocial is a personality trait that can refer to "the behavioral symptoms of antisocial personality disorder (ASPD)," which can include psychological conditions such as psychopathy and sociopathy.

What Is Antisocial Personality Disorder (ASPD)?

Antisocial personality disorder (ASPD) is a mental condition characterized by a long-term pattern of lying, cheating, stealing, manipulating, or exploiting others without remorse. This can also apply to more violent criminal activities in extreme cases. ASPD is better known by the labels psychopathy or sociopathy, which are similar diagnoses but have slightly different traits. The simplest explanation is that sociopaths are made and psychopaths are born, but it is more complicated than that.

Be Conscious of the Correct Word