Autumn vs. Fall: The Meaning Behind Both Words

The leaves are changing color, the smell of pumpkin spice lattes hangs in the air, and gourds of all shapes and sizes line store shelves. Whether you welcome light jackets and Halloween or can’t stand the thought of cold weather, that third season eventually comes for us all. Some people (mostly American English speakers) refer to the season as fall, while others (mostly British English speakers) call it autumn. But good gourd, what’s the difference? 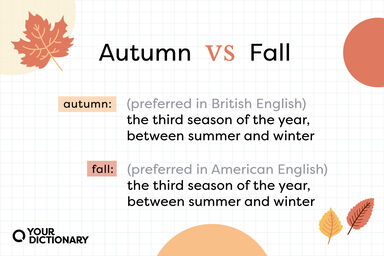 What Does “Autumn” Mean?

Autumn is a noun that refers to the third season of the year between summer and winter, generally lasting from September to November in the northern hemisphere and March to May in the southern hemisphere.

Autumn is pronounced “aw-tum,” with a silent “N.” That silent “N” is a holdover of the word’s Latin roots, which you can see in other words where an “M” precedes an “N,” like solemn, column, and hymn.

Autumnal is the adjective form that refers to things related to the season.

Other Forms of “Autumn”

Along with its seasonal connotations, autumn has also become a common proper noun name. As a name, Autumn has been used since roughly the 1960s.

You might also see autumn pop up in reference to makeup and clothing. The practice of seasonal color analysis essentially looks at your natural skin tone, eye color, and hair to determine the clothes and accessories that might look best on you. If you’re an "autumn," you generally have a warm tone with dark features, while a "summer" has a cool tone with lighter features.

The word potentially originates from both Latin and French. The classical Latin root autumnus and post-classical Latin autumpnus, meaning “the third season of the year, as well as “the fruits and harvest of that season.” These Latin roots may potentially come from Etruscan.

How To Use “Autumn” in a Sentence

Autumn is a fairly straightforward word thanks to its limited meaning, but it still doesn’t hurt to see how it could be used in a sentence.

What Does “Fall” Mean?

Fall functions as either a verb or a noun.

When used to refer to the season, the meaning reportedly comes as a shortened form of “fall of the leaf,” referring to the way that trees tend to shed their leaves during the season.

How To Use “Fall” in a Sentence

Fall can be a little more confusing because it has different meanings aside from pumpkin spice latte season.

“Autumn” or “Fall”: Which Should You Use?

Much like choosing between pecan pie and pumpkin pie, you can’t really make a wrong choice between autumn and fall. Both refer to the exact same time of year.

There are some slight regional differences.

What Is the Autumnal Equinox?

Thanks to the specter of global warming and the constant push of marketing, autumn seems to get pushed closer and closer to summer. In reality, there’s a very real marker for when the season transitions from summer to autumn, and that’s the autumnal equinox.

The autumnal equinox occurs around September 22 every year. The day is marked by nearly equal amounts of daylight and darkness, after which the days get shorter and shorter until the winter solstice. The winter solstice marks the shortest day of the year and the beginning of winter.

Before fall, before autumn, there existed harvest. Harvest comes from Old English hærfest, referring to a season between August and November. Interestingly, the name of the season came before the act of gathering crops.

After the 1500s, the meaning of harvest more often referred to gathering crops once it was overtaken by autumn and fall. If you want to be unique, start calling the third season harvest.