Awhile vs. A While: Meaning and Difference in Everyday English

The terms awhile and a while are often used interchangeably, but should they be? Would you say "it’s been a while" or "it’s been awhile"? Explore the difference between awhile vs. a while and their uses. 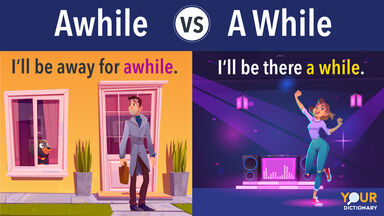 Definitions of Awhile and A While

Not only do awhile and a while look and sound the same, but their meanings are also quite similar. They both indicate time. However, a while measures a span of time while awhile is used in place of time.

Awhile is an adverb that means “for a time.” To determine whether you should use awhile or a while, ask yourself whether you can replace awhile with "for a time" or other similar terms, such as briefly or "a bit." If you can, you've chosen the right word.

A While Meaning and Usage

A while is often used after prepositions or in phrases. It is usually followed by a word that measures time, such as:

Look at the following examples. Can you replace a while with another measurement of time like an hour, a day, a year, etc.? If you can substitute a while with a specific amount of time, you know it's the right word to use.

Although the rules mentioned above are the standard, there are always exceptions. Awhile is often used after a preposition or with ago, and a while can also be used as an adverb.

So can they be used interchangeably? In certain cases, yes. Take the following examples. In these contexts, a while and awhile can be replaced with either briefly or a specific measure of time.

Study Awhile ... or A While

Now that you know how and when to use awhile and a while in writing, study up on some other commonly confused words and phrases. These can include homonyms such as cite, site and sight or terms that are often used interchangeably like toward and towards. Whatever you choose to focus on, practice makes perfect!