Ax vs. Axe: Chopping Through the Difference 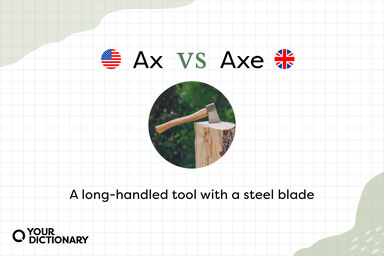 Simply, axe is the most common spelling of this word. According to Garner’s Modern English Usage, axe is dominant in print sources. However, when it comes down to it, there is a slight preference for ax in American English while axe is the standard British spelling.

Examples of Ax and Axe in Sentences

The noun form of ax or axe refers to a tool with a wooden handle and steel blade used for chopping wood. As a verb, it refers to the act of using an ax(e) on something or to end, cancel, or dismiss something or someone.

Expressions That Use Ax and Axe

Ax and axe are also featured in common expressions and idioms such as:

How the Two Spellings Came About

Axe is the original spelling and common in both British and American English. However, while axe is the only standard spelling in British English, American English uses both with a slight preference for ax in writing style guides. For example, the AP Stylebook, the Chicago Manual of Style and the Oxford English Dictionary list ax as the preferred spelling, while Garner’s Modern English Usage advocates for axe. Whichever spelling you use, consistency is key!

Choose the Correct Spelling Every Time

Ax and axe are not the only examples of words that have more than one correct spelling. More often than not, these differences come down to American vs. British English. Explore the differences between blond and blonde or disc and disk to see how one letter at the end of a word can be important.