Been vs. Being Differences Made Clear

Although been and being sound similar and come from the same root word, they actually mean different things. Understanding these differences and looking at examples can help you learn how to use been and being in a sentence correctly. 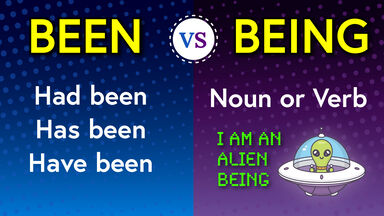 Been vs Being Example
Advertisement

Three Different Meanings for Been

While been and being both come from the irregular verb “to be,” they have different meanings. Been can mean three different things, and understanding those meanings can help you know when to use this word.

Been Can Mean Visited

One of the simplest ways to use been is when talking about someplace someone has visited. It’s used with helping verbs like had, has, or have.

Been Can Refer to Continuing Action or Existence

Another use of been is to refer to something that happened or existed in the past and continues to happen in the present. This can be abstract or concrete, and been is once again used with forms of the auxiliary verb “to have.”

Been Can Indicate Past Support

Less commonly, been can be used with the words there or here to indicate past support. It is the past tense of “be there” or “be here.” Again, it is used with forms of the helper verb “to have.”

Two Different Meanings for Being

Understanding the various meanings of being will help you see how it differs from been. One key difference is that being can also be used as a noun, while been is always a verb.

Being Can Mean an Entity or Existence

You can use being as a noun to mean a person or intelligent entity. It can also mean the existence of something. These examples will help you understand.

Being Can Show Current Behavior or Action

As a verb, being can indicate an ongoing or current behavior, an action, or a state of existence. It is used with the helper verbs are, am, was, and were, all of which are forms of the verb "to be."

Six Key Difference Between Been and Being

Now that you understand the different meanings for these words, you’ll be able to see why they are used differently in speech and writing. Keep the following key differences in mind.

Been can never be a noun. Being, on the other hand, can serve this function.

2. Being and Been Indicate Different Times

3. Only Being Can Start a Clause

4. Only Being Can Be a Gerund

A gerund is a verb that can act as a noun. They always end in -ing, so only being can serve this function.

5. Been and Being Use Different Helping Verbs

While been and being can be helping verbs themselves, they also need an additional auxiliary verb or helping verb to form a verb phrase. This sounds complicated, but it means they don’t always stand on their own. The helping verbs they use are different, however.

Been uses have, has, and had:

6. Only Been Can Be Used Hypothetically

Only been can be used to describe something that might occur or might have occurred but is not certain. These hypothetical scenarios start with the “would have,” “could have,” or “should have.”

Test Yourself on Been and Being

Wondering if you know how to use been and being in a sentence? Test yourself with these examples. The answers are at the end of the article.

Like many misused words, been and being are easy to confuse. However, when you understand the differences, you can feel more confident when you use them in speech or writing.