Learn how to use began and begun correctly in a sentence. See a clear breakdown of how usage is different for these words through examples. Get tips for when to use began vs. begun. 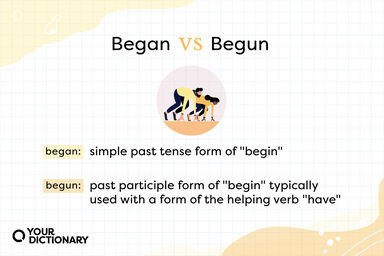 People Getting Ready For Race With Begun vs Began Definitions
Advertisement

Begun or Began: It All Starts With Begin

The begun or began debate all starts with one simple word: begin. Both begun and began are past forms of the irregular verb begin. However, when you use these past tense forms of begin will depend on your sentence.

Check out this quick and easy-to-reference chart showing you the differences between began and begun before diving into each term in depth.

When to Use Began: Past Tense

When it comes to using began in a sentence, it comes to play when you are trying to convey past tense for the word begin. Since begin is an irregular verb, rather than adding -ed to the end, the word changes to began. For example, you wouldn’t say, “I beginned reading this book a few months ago.” Instead, you would say, “I began reading this book a few months ago.” It’s included in a simple past tense sentence that doesn’t need a helping verb like have, can, must, or may. To see how you use began, see a few sample sentences with began at play.

When to Use Begun: Past Participle

Now, it’s time to take a look at begun. Begun is the past participle of begin. But what does that really mean? You use a past participle with perfect tenses when talking about something that happened at some point or is still continuing. Additionally, begun needs a helper in the sentence, so it’s always used with a form of the helping word have. Watch how begun is used in a sentence.

Quick Tips for Knowing When to Use Begun vs. Began

It can be hard to know whether you should use the word began or begun. However, there are a few quick tips you can think of.

Began vs. Begun: That’s the Question

While the great began vs. begun debate might not be a Shakespearean level question, it’s a confusing grammar point all the same. Now that you know the tricks, these two words shouldn’t trip you up. Continue your time word journey by exploring the use of continual vs. continuous. Then, explore other confusing past tense verbs like hanged vs. hung. Learn more fun grammar problems by exploring at and in for time and place.