Bemused vs. Amused: Leaving the Confusion Behind

It's tempting to think that bemused is the opposite of amused. However, that's not quite correct. These rhyming words describe two different types of reactions, and mixing them up may lead to unnecessary confusion! 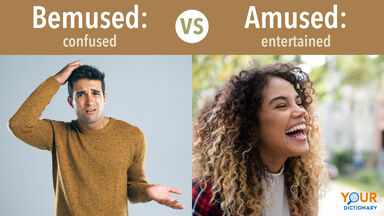 How Are Amused and Bemused Different?

If you've ever used amused and bemused interchangeably, you're not alone. However, once you know how different their definitions are, you likely won't make that mistake again.

The word amused is the past participle form of the verb amuse — "to entertain." In this form, it can function as a participial adjective or as a past tense verb to describe the entertainment.

Examples of Amused as an Adjective

When you use amused as an adjective, you're describing the person who is seeing something entertaining. For example:

Examples of Amused as a Verb

Amused can also function as a past tense verb when referencing the entertainment itself. For example:

A popular misuse of the word bemused is "secretly amused." Some writers may use the phrase "bemused smile" to show that someone is secretly enjoying what they're seeing. Other writers may mistakenly use bemused to mean "unamused." However, both of these definitions are incorrect. Bemused means "confused," and using it incorrectly will only bemuse your reader.

Examples of Bemused as an Adjective

Like amused, bemused is the past participle of the verb bemuse. It's most often used as a participial adjective to describe someone who doesn't understand what they are witnessing. For example:

Examples of Bemused as a Verb

When bemused functions as a past tense verb, it describes the situation that is causing the confusion. For example:

Why Does It Matter Which Word You Choose?

Using the correct word always matters, but in the case of amused vs. bemused, it matters quite a lot. Substituting bemused for amused totally changes the meaning of a sentence. For example:

Using these words interchangeably could result in misunderstandings (and in Mr. Adler's case, possibly hurt feelings). Be sure you really mean "bewildered" when you're using the word bemused.

Making mistakes in writing and grammar can be discouraging. But keep in mind that common vocabulary errors such as using amused and bemused synonymously are quite common — in fact, lots of other similar-sounding word pairs fall into the same category! Master word choice and avoid writing errors with a guide to commonly confused words in the English language.